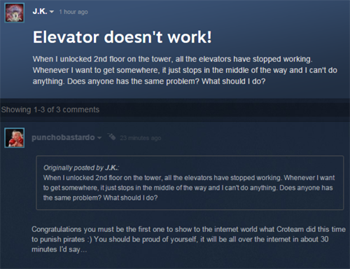 The developers who added an invincible scorpion in Serious Sam 3: BFE have trapped pirates in an elevator in The Talos Principle.

People who played pirated copies of The Talos Principle have discovered they can’t move forward thanks to developer Croteam‘s anti-piracy measure. Once unlocking the second floor of the tower in the game, the elevators will get stuck.

Someone posted in the Steam discussion forums for The Talos Principle yesterday about an elevator no longer functioning correctly in the game. A reply to the post pointed out that this is Croteam’s anti-piracy measure: “Congratulations you must be the first one to show to the internet world what Croteam did this time to punish pirates :)”

Developers have found ways of annoying pirates or making pirated versions of their games unplayable. Croteam added an invincible scorpion in Serious Sam 3: BFE that would follow the player. It follows the player, is seriously difficult to evade, and does not die. Other companies like Ubisoft have messed with Far Cry 4‘s field of view for pirated copies, and The Sims 4 only shows up as a pixilated blur in pirated copies.

Not all developers punish pirates, however. 11 Bit Studios distributed Steam keys for This War of Mine after discovering a popular torrent of the game.

According to a NeoGAF post, at least the latest pirate for The Talos Principle doesn’t seem bothered.

8 Things We Wish We Had Gotten For Christmas

How Much Money did The Interview Make Online Last Week?