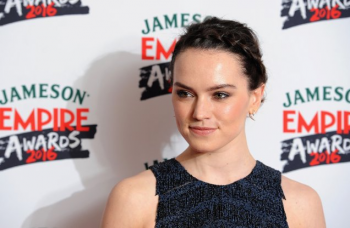 Daisy Ridley, best known for her role as Rey in Star Wars: The Force Awakens, has told The Hollywood Reporter that she is currently “in talks” to play Lara Croft in an upcoming reboot of Tomb Raider.

Ridley said that while there there “have been conversations” about her picking up where Angelina Jolie left off with Lara Croft, she hasn’t yet been officially offered the role. “I’m waiting for someone to say ‘I want you, let’s do it’,” she said, adding that there wasn’t a script for the film yet.

Star Wars co-star John Boyega also told THR that Ridley would be perfect for the role. Boyega, who is an avid gamer himself, said “I played Tomb Raider the game, it’s a new take and I think the movies are going to be based on that version. But I texted Daisy [and] was like, ‘this is you!’ and ‘you need to get on that because you could be Lara Croft.’ She should be.”

The planned Tomb Raider movie reboot is set for release in 2017, and will be directed by newcomer Roar Ulthaug. That’s all we really know about it for now, but it does seem quite likely it will follow the “new” games, rather than pick up where Cradle of Life left off in 2003.