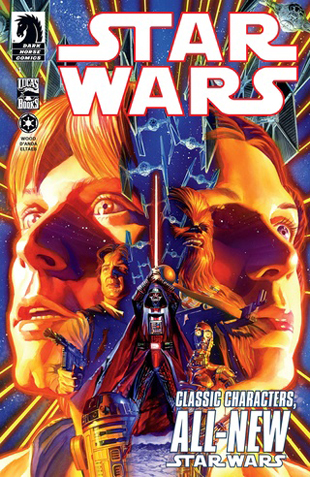 Holy Sith! For a limited time, you can get everything Star Wars that Dark Horse has ever published.

Well, we’ve finally reached the end. As announced a year ago, beginning January 1, 2015, the rights to publish comic books in the Star Wars universe will belong to Marvel, probably forever. (At least as long as Disney owns both Marvel and Lucasfilm, anyway.)

That’s sad news for Dark Horse Comics of course. The intrepid publisher has been the exclusive home for all things Star Wars in comic book form since 1991, helping among other things to flesh out the hugely complicated – and now nullified – expanded universe. But Dark Horse has at least gone out with a bang. Not only did it put a nice cap on things over the summer with a gorgeous adaptation of George Lucas’ original draft of Star Wars, now comes the coup de grace: Earlier today, Dark Horse released, digitally, every single Star Wars it has ever published.

The titles are collected in a single package called the Star Wars Farewell Megabundle. For $300, you can get it all, literally everything – including the complete “Classic Star Wars” reprints of the 80s newspaper strips. The catch: Dark Horse loses the rights on January 1. Thus, you have only 5 days to snap this up before it goes away forever.

If you’re interested, and have three hundred Galactic Credits to blow, head over to Dark Horse and buy this thing now. And may the Force be with you, always.

Spider-Man and the X-Men and Ragnarok: Comics Collection for Dec. 26, 2014