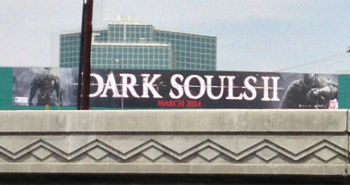 There’s been a bit of trepidation surrounding Dark Souls II. While many are excited for the game, remarks by Namco Bandai, hinting toward efforts at broadening the franchise’s appeal to larger audiences, have had some concerned the sequel won’t live up to the challenging and hardcore experience that arguably helped the first game rise to its level of success. Despite claims that the sequel would be just as difficult as the first game, Namco Bandai’s public relations direction Lee Kirton has nonetheless expressed the publisher’s desire to “[widen] the net a little.” What’s been left out of this talk is when the publisher intends to cast this net.

The answer to that question, it would seem, is March 2014. Though there has been no official confirmation or announcement from Namco Bandai, a giant billboard has appeared over the L.A. Convention Center advertising a March release for Dark Souls II. The Convention Center will, of course, be playing host to E3 2013 in only a few days time, lending further legitimacy to the billboard.

While the news is likely to be welcome for current-gen gamers anxiously awaiting the game, it could also have next-gen implications as well. With Xbox One and PS4 both slated to come out before 2014, a March release for Dark Souls II could make next-gen editions of the game a possibility. While the game would still be coming out for Xbox 360, PS3 and PC, shinier versions for the new consoles could be a boon as they establish user bases in the wake of their launch.

Prey 2 Was “A Full Game” When Bethesda Cancelled it