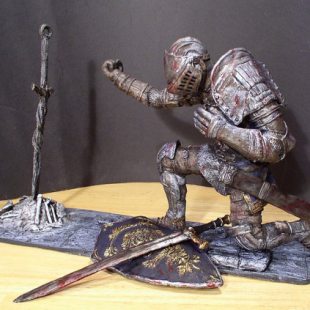 Dark Souls is a game renowned almost as much for its disturbing atmosphere as it is for its intense challenge. No small portion of this is owed to the game’s enemies which, in a word or two, are just plain creepy. From the flimsiest of zombies to the deadliest of dragons, Dark Souls‘ monster design does a fantastic job of crafting creatures that will give you nightmares long after you’ve slain them. In other words, they’re just the sort of thing you want decorating a shelf in your bedroom.

If owning a miniature version of a Dark Souls monster is something that interests you, you might want to check out Peter Nordstrom’s Etsy storefront. For some time now, he’s been selling a line of custom made statues based on characters and enemies from Demon’s Souls and Dark Souls. Costing between $50-$300, Nordstrom’s statues include characters like Garl Vinland, Artorious the Abysswalker and more. Speaking about the origins of the statues, he revealed that they’re a byproduct of his experiences working with Dark Souls publisher Bandai Namco.

“My love and obsession with sculpture, along with a little luck, landed me a great opportunity to work with Namco Bandai Games America in creating statues from their hit game, Dark Souls, in 2011,” he explained. “They had me make them 5 statues to give away in their “Treasures Untold” contest, then another 4 after that.” Fans loved his statues so much that he began receiving regular doses of mail asking him to make more. Initially daunted by the expenses of sculpting individual statues from scratch, he taught himself how to create custom molds so he could produce and sell the more affordably.

The contents of his Etsy shop aren’t even the full extent of what Nordstrom has for sale, either. If you visit his DeviantArt page, there are several other pieces that you can contact him about and purchase. Check out his work and let us know what you think. Are they delightfully dark or do his sculptures lack soul? (See what I did there?)

8 Films That Will Never See The Light Of Day

WTF Science?! Can You Guess What These Strange Pics Are?