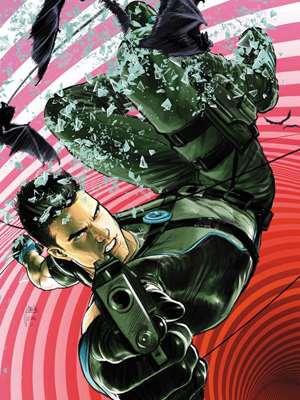 They say imitation is the sincerest form of flattery, but I bet this won’t S.H.I.E.L.D. DC Comics from follow-the-leader criticisms.

DC Comics has for the last three years been taking a trip down the open road with someone half its age in the convertible it bought on its 45th birthday, or as we know it, The New 52. Now it seems the publisher plans to get hair implants and add spinning rims to that convertible, at least judging by the news that Dick Grayson, the original Robin-turned-Nightwing, will soon be reinvented as a covert spy in the upcoming spy/thriller themed comic series Grayson, written by Tim Seeley and Tom King.

Grayson will pick up where the character’s current comic series, Nightwing, will leave off when it concludes this May: Dick Grayson, his identity as Nightwing exposed and his enemies onto him, is seemingly murdered, but he actually faked his death. He is then convinced by Batman to let everyone, including other members of the Bat-Family of characters, continue think he’s dead so that he can operate in the shadows as part of the covert intelligence agency SPYRAL (first introduced in Batman Incorporated).

The series is apparently going to be played for 24-like drama, at least they way it’s described by the series’ cocreators. Dick Grayson will not only have to deal with the pain of letting his loved ones think he’s dead, he’ll also have to deal with working for an organization “out of his comfort zone.” SPYRAL, you see, is yet another intelligence agency with a swank acronym and a commitment to stopping bad guys by employing methods and tactics that are questionable at best.

This could work of course, as the DC Universe could use some shaking up (even if it has to happen under the New 52 banner.) Given how relatively underdeveloped Dick Grayson is – Nightwing has never been much more than NotBatman in Bludhaven, or NotBatman in New York, or NotBatman in Gotham City – the character might be a perfect fit to inject some James Bond style action into DC. They’ll at least finally be giving him his own arch enemy with the new series. And let’s be honest: whatever your politics, 24 was a fantastic hour of television for most of its run. Further, at least the creators seem like they’re thinking big. Their plan is for every issue to be an event people want to discuss, and cowriter Tom King specifically compared it to FX’s The Americans.

The wild card King who, at least according to his official bio*, left the comics industry after 9/11 to work as a “counterterrorism operations officer” for the CIA, and that purported experience will apparently inform Grayson. Whether that means Grayson will examine hard-won lessons from a decade of bad practices, or just offer up uncritical support for Jack Bauer’s ethics, remains to be seen. Here’s hoping Dick Grayson doesn’t stop whatever he’s doing to at least once an issue to explain to the reader why warrantless wiretapping of anyone is a good and noble thing, amirite?

But I’m less bothered by the potential for the series becoming a throwback to the early 00s, and more by the obvious fact that anyone who’s been to a movie in the last few years will immediately find all of this very, very familiar. DC, it seems, is chasing after Marvel, first via the introduction of its very own version of SHIELD, complete with moral ambiguity, and second with a longstanding hero forced to go underground in order to do the right thing, however it’s defined in this series anyway. They’ve even gone so far as to make Dick look suspiciously similar to Grant Ward from Marvel’s Agents of SHIELD. Grayson is going to have say more than “ME TOO, ME TOO GUYS!” or it’s going to land with a thud.

Of course I’m going to check this series out as soon as it’s released, if only to find out how much of my cynicism is justified. But what about you, readers? Does this look like a classic in the making, a throwback to 2003, or a follow-the-leader race to the bottom middle? Sound off in comments.

* Naturally, the only publicly available information that confirms King’s CIA employment is his official author bio. Forgive me if I remain skeptical of the length of nature of said employment until more information is available.