The classy prints show Wonder Woman as Rosie the Riveter and more. 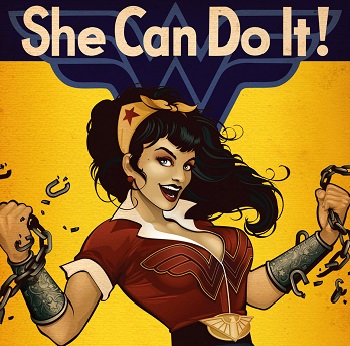 Female superheroes don’t have quite the same recognition that their male counterparts do. While the likes of Batman and Superman are easily recognized by the public at large, characters like Wonder Woman and Batgirl often seem like gender-swapped copies, not actual heroes in their own right. To rectify that, here’s a series of posters depicting DC’s powerful heroines in the style of classy pin-ups from the 1940’s.

The prints come courtesy of Quantum Mechanix, the same guys behind the beautify art nouveau take on the ladies of Firefly. There are ten posters in all, each one a period advertisement. For example, Wonder Woman’s posing in the style of Rosie the Riveter, while Catwoman’s in an ad for the Gotham City Savings and Loan. Each one’s a gorgeous work of art that include clever throwbacks to the characters.

So, DC, how about that Wonder Woman movie, eh? It’s about time these ladies got their due.