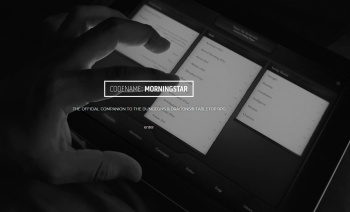 Wizards of the Coast has announced an upcoming integrated digital ruleset and database for Dungeons & Dragons.

Presently known as Codename: Morningstar, the toolset is being developed by Trapdoor Technologies and promises to also offer a customizable character sheet, adventure management, party communications between players, as well as options for online or offline play. Further, all the latest D&D adventures and content will be available to download as they are released, simultaneously with the physical versions.

Morningstar’s website doesn’t offer much more insight, but datamining the source code has revealed a countdown timer and a percentage progress bar, suggesting more information is to come soon. Also found were references to adventure session data, maps, die rolls, encounters, creatures, animations, death saves, initiative counters, adventure and library “presenters,” a full-on wiki, and more, which serves as a nice teaser for what to expect.

While details are presently scant, the tools will have a limited playtest at Origins Game Fair, which takes place this week, June 11-15.

What would you like to see in a digital toolset and game aid?