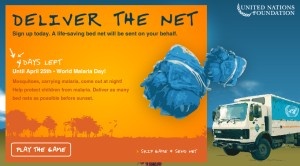 The United Nations has launched a simple game called Deliver the Net as part of its “Nothing But Nets” campaign against malaria in Africa.

The game challenges players to hop a motorcycle and deliver as many mosquito nets as possible to African families before the sun sets. A sponsor fund of $200,000 has been set up to donate bed nets on behalf of gamers who sign up after finishing a round of the game. $10 contributions to buy and distribute bed nets are also being accepted at the site.

While not likely the best game you’ll ever play in your life (or even today), Deliver the Net highlights the persistent and growing problem of malaria in many African nations. According to the Nothing But Nets website, more than 500 million people are infected with malaria every year, and more than one million die as a result. Many regions in Africa lack the resources to effectively combat the disease, which is a leading killer of children and is also estimated to cost the continent roughly $12 billion annually in lost productivity.

The $200,000 bed net sponsor fund donation is valid until World Malaria Day on April 25. To try your hand at Deliver the Net and learn more about the Nothing But Nets anti-malaria campaign, go to www.nothingbutnets.net.

Resisting the Next Generation