Late in the day on Friday, after a good number of DICE attendees had already left, those of us resilient enough to stick it out for the last few panels of the day were treated to a battle of developers. In one corner, Insomniac Games, developers of Ratchet and Clank; in the other, Epic Games, developers of Gears of War and licensors of the Unreal engine. And in a surprise third corner, UbiSoft Montreal, the makers of Assassin’s Creed.

The battlefield: middleware, and whether to make your own technology or buy it from someone else. Insomniac got the floor first.

“You should invest and build your own engine,” said Insomniac’s Engine Director, Mike Acton. “It’s an investment in your own people.”

Acton opened by citing the No. 1 reason most developers choose middleware, that purchasing middleware instead of devoting programmer time to develop engine technology internally allows resources to be devoted strictly to gameplay, and then torpedoed it.

“I want to say that’s a complete crock of shit,” he said.”[Instead] you concentrate on learning how to use other people’s tech.”

“If you want to know how much faster you can make a game with someone else’s engine, ask Silicon Knights,” Acton said, referring to the developer of the forthcoming Too Human, currently embroiled in a legal dispute with Epic Games, the makers of the Unreal engine. Silicon Knights claims Epic’s failure to properly support their engine resulted in slipped ship dates for Too Human, which was developed using Epic’s Unreal technology, and a poor showing at E3, both of which damaged Silicon Knight’s reputation and possibly endangered their survival. The case has since become the textbook argument against licensing middleware.

According to Acton and Andy Burke, Insomniac’s Tools Group Lead, developing technology in-house actually saves time and money, eliminates the learning curve of having to decipher someone else’s code, and enables engineers to develop exactly what they want – and what the designers want – without being straight-jacketed into someone else’s idea of what works and what doesn’t.

“Isn’t this just wanting to build it yourself because you think you can do it better than anyone else?” Acton asked, citing the No. 1 criticism of engineers who insist on developing technology in-house. “It’s not. It’s about responsibility.” When the game doesn’t ship, or ships in a bad state, the middleware vendor won’t get blamed, “you will. … The only real way to take that core responsibility is to make sure it’s done right and that your people are doing it.”

But According to Epic’s President, Dr. Mike Capps, it’s exactly about thinking tech has to be built in-house because no one else can do it better than you can, and chances are they can.

Capps was in the unique position of having followed a presentation harshly critical of not just middleware in general, but his middleware specifically, in spite of the fact it’s the most licensed, and, counting it’s licensees, best-selling off-the-shelf engine solution available. And if that wasn’t enough a minefield, Silicon Knights’ Dennis Dyack and his lawyer were sitting in the front row. 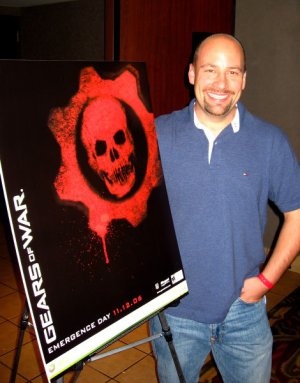 “I want to give a shout out to Mass Effect, BioShock and all the games who used our tech to do great things at the awards last night,” he said. BioShock won four awards, and Mass Effect brought home RPG of the year.

Capps went on to debunk the suggestion that in-house technology is easier to implement than licensed middleware, pointing to the fact that most in-house tech isn’t developed from scratch, rather cobbled together from pre-existing technology. But the reason to license middleware isn’t just for the cost savings. It’s about testing, stability and the “ooh” factor.

“Reading code is four times as hard as writing it, and we all know that,” he said. “But the artists look at those tools [in licensed middleware] and go ‘oooh!’ And that’s how I sell middleware.”

It’s also, according to Capps, about documentation. He says with internal tech, the long lead time between establishing technology and shipping the game isn’t spent on writing documentation. It’s spent on adding new features or tweaking the existing ones, all of which add more complexity, not less, increasing the need for the documentation that isn’t being written. Not so with middleware.

But wait, there’s more. Epic has a team of engineers from Nvidia “who do nothing all day but make Unreal faster. They’re not going to come and optimize your in-house tech.”

But the truth about middleware, as with all things, probably lies somewhere in the middle. Which is why Ubisoft Montreal’s CEO, Yannis Mallat, fresh off a plane from Europe, imaginary cigarette dangling precariously from one corner of his mouth, had the last word.

Mallat opened with an interminably long clip from the Disney movie Bambi, set to some excruciatingly sweet pop music. The idea, according to Mallat, was to demonstrate that emotion is more powerful than technology. The film was grainy, small and old. But the emotion remained intact.

“Emotion sells,” he said. “Technology does not. Our best bet is to innovate and create emotion for the players. Technology is important indeed, but technology’s main role is to serve our creative talent.”