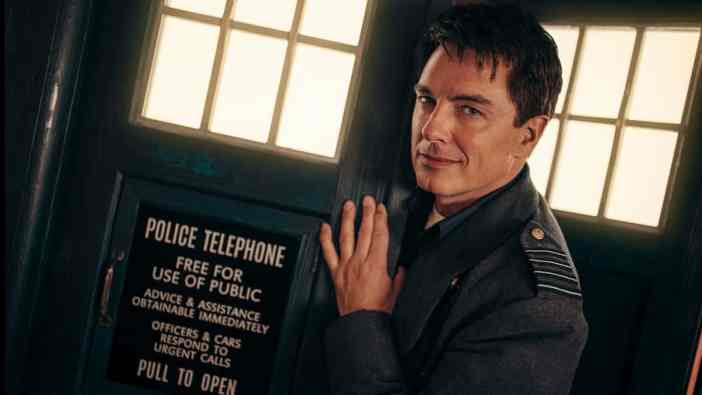 Doctor Who, as it has done for more than a decade now, is returning with a holiday special called “Revolution of the Daleks.” The first trailer for the special has landed, and it is chock-full of reveals about the series return, including newly redesigned Daleks, Jack Harkness coming back, and the surprise return of businessman Jack Robertson, who originally appeared in “Arachnids in the UK.” The trailer also hints at a n Fam-heavy storyline as the Doctor is still trapped in prison.

Of course, the most noticeable aspect of the trailer is the drastic redesign of the Daleks. The classic Doctor Who villains have had plenty of looks over the years, but this is by far the most streamlined they’ve ever been. They seem far less bulky than their previous iterations and, honestly, a bit more threatening. They still are obviously Daleks, but the harsher angles and minimization of the balls on their side make it all seem a bit more serious. Their infiltration of Earth is a tired trope in Doctor Who by now, but it can still pull off some excitement.

Showrunner Chris Chibnall had this to say about the holiday special:

We’ve crammed this year’s Doctor Who special with an explosion of extraordinary acting talent. Where else would you get British acting royalty, a globally renowned U.S. screen star, an (inter)national treasure of stage and screen, and one of Britain’s hottest young actors — just in the guest cast! Put those together with Jodie Whittaker, Bradley Walsh, Mandip Gill, and Tosin Cole (and Daleks! Did I mention Daleks!) — and you get a cast to be exterminated for. And things will explode. Promise.

The holiday specials for Doctor Who once use to be exactly that, a bit of an extra story based around the holiday spirit. However, they’ve grown into bigger events over the years and now often act as very early season openers, as this one seems to be doing. When we last left the Doctor, she was imprisoned after discovering that she was “The Child” and basically created the entire Time Lord race after falling from a rift in time. It was a controversial storyline for fans, and we’ll have to wait and see how the series handles the backlash, as well as if anyone is leaving when the shortened 13th season premieres next year.