A tweet by Ivy Doomkitty inspired me to write about this topic, because there’s this weird cattiness surrounding “professional” cosplayers regarding whether or not they make their own costumes. It’s annoying, because it shows an ignorance of the realities of being an in-demand convention guest who is expected to bring a certain amount of added value to an event with ever-changing, amazing costumes. When I was most active, I was heading to cons with one to three new costumes a year. After a while, you need help to maintain that schedule. 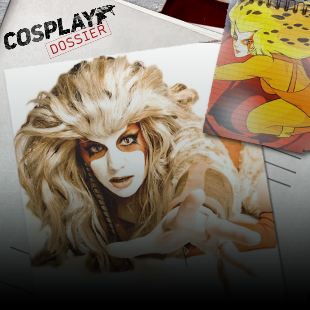 So as a rule of thumb, assume a popular cosplayer has some input and some involvement with the manufacturing of the costume they’re wearing. Also assume that other people were involved in the process.

This isn’t dishonest: it’s practical. There aren’t enough days in the year to attend a few dozen conventions and get multiple complex costumes made, but there’s more to it than that. The expense of personally owning a vacuform machine, leatherworking tools, electrical wiring equipment, and other specialty items is prohibitive for most cosplayers, never mind the storage space it takes up, so it makes more financial sense to just get items outside your personal skill set made. There’s no point in investing in all new tools when you only need them once in the foreseeable future. An additional reality is that it’s very difficult to get form-fitting, fabric-based costumes to sit properly unless you’ve got someone else fitting them.

Almost everything I know about sewing came from two women, my mother, and an amazing cosplayer you met in the Agents of Cosplay wig tutorial named Alexandra Gerlach I collaborated with Alexandra on multiple costumes, including my Cheetara and Ivy Valentine cosplays, to promote her old costume shop before she started her wig business. She’s better with a sewing machine than I’ll ever be, but the thing I loved about working with her was that it was always a learning process. She didn’t just do things for me. She taught me how to do them. So if someone asks me how the costumes were made, I know, step-by-step, how it was done, and I can explain the process. There are certain things I just can’t physically do myself, because my hands are wrecked.

When someone else creates a piece, or even the bulk of a costume, for a high profile cosplayer, that doesn’t mean the cosplayer isn’t still heavily involved. The Cheetara and Ivy Valentine costumes are both one-piece bodysuits, so pieces in strategic areas don’t shift, bunch, or run. The difference between a good costume and a great costume is usually how it fits on your body, so you don’t want anything cutting in or creating lumpy body parts, panty lines, or muffin tops… unless, of course, the character is perpetually bursting out of her shirt. Some people might be surprised to hear that a smooth silhouette is more about a costume that’s designed and fits properly, and less about body fat content or hitting the gym. You really want to get the fit right, and that’s nearly impossible to do yourself.

You know that story about Marilyn Monroe being sewn into a dress? Cosplays aren’t that different: if you want them to fit properly, you have to stand up straight while another person baste stitches the exact places the alterations need to be made. It’s also a good way to make sure you can actually get in and out of the costume you’ve made. For something like the Ivy Valentine costume, we also had to baste stitch the path of the various purple snakeskin parts to make sure they ended up in the right places. No one’s body is completely symmetrical, but I have one hip that sits higher than the other because of an old injury. That was a challenge with the Cheetara costume, because it looked funny until we matched the costume’s hip to my actual hip. When the garment was symmetrical, it looked crooked. I’ve spent a lot of time in what I call the “cosplay Jesus pose” — legs slightly apart, arms stretched to the sides… like I’m on a cross, get it? Okay, yes, cosplay humor is less-than-politically-correct. 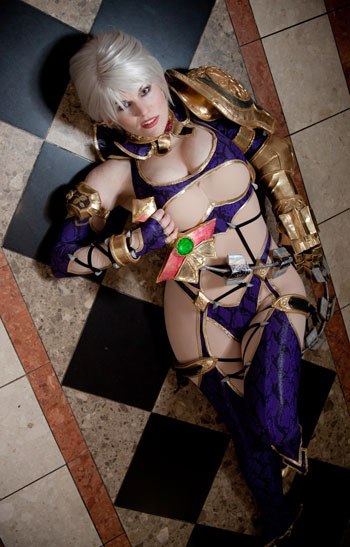 Part of the fun of cosplay is sharing crafting tips, and learning from other people’s techniques. If you never work with people better at things than you, you don’t learn nearly as much. The people I’ve learned from are still better than me, but the point is I can do more basic things myself now. I improved. Well-known cosplayers can also really help out people looking to promote their work by wearing their creations, and I don’t think that should be something that’s criticized. As Ivy Doomkitty said on twitter, just be honest and give credit where credit is due.

The only caveat to that is that you shouldn’t enter someone else’s work in Masquerades. For those who don’t know what a Masquerade is, Masquerades are “official” costume contests that adhere to International Costumers’ Guild rules. Those rules are like the pirate code – they’re more like guidelines – they’re heavily adapted from region to region, but one rule that it’s really bad form to breach is passing off someone else’s work as your own. If your friend made your costume, your friend is the contestant. The category you’re registered in is based on the experience level of the person who has actually made the costume, not the model.

I don’t tend to gear this column toward competitive cosplayers, however. I prefer to focus on what’s referred to as “hall cosplay,” because that’s what the majority of cosplayers do. If you’re not competing, it really doesn’t matter who made your costume as long as you’re having fun.

I’ve been the target of a lot of backstabbing based on that opinion though. Snootier costumers dig at me because I don’t make my own costumes from scratch. But with video content to produce and a ton of stuff to write, I don’t have the time to make anything from scratch these days, other than that awesome coffee cup costume from the holiday episode. Okay I bought the gingerbread applique on that one too.

My personal philosophy of cosplay is that it should be communication, not a competition. It’s about what makes you feel good and have fun. It’s not up to someone else to judge that… okay, I recognize that statement is ironic since I myself am a masquerade judge, but I am somewhat consistent there. When I’m judging, I try to make sure that everyone who deserves a prize gets one, even if the judging panel has to create an award. Cosplay is too diverse to be boxed into “first, second and third”, and judging rules for Masquerades reflect that. If something really shines on a costume, a good judge makes sure a cosplayer gets rewarded for that somehow, no matter how tough the competition is.

So what’s the TL;DR here? Does it really matter if you make your own cosplays? No. If you paid for a commission, let people know. It will send more business to the person who made it. It’s more important to be honest than to be totally DIY.