This isn’t something most people would admit, but most people are too insecure to accept anything that seems “weird”. “Weird”, however, is not inherently bad, and despite what CSI will suggest, associating with furries is not dangerous. In fact, if you get over yourself enough to give furries a chance, you’ll meet some pretty amazing, caring, warm people, who just want the world to be more cuddly. 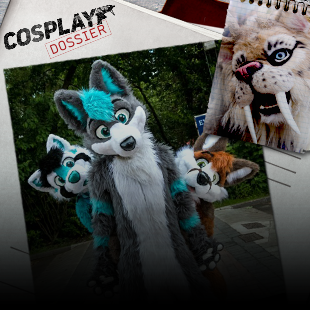 Let’s address the yiffing right off the bat, because it’s the thing that many people find the most off-putting. Some furries do get off on pornographic images of anthropomorphized animals. I walked into a guy’s apartment once and he had sexy white cat girl art framed and hung on his walls. The first thing I thought was “Oh crap, furry alert!” The next thing I thought was “This actually does not affect my life in the slightest.” Similarly, more-than-occasional images cross my twitter feed of some animals with giant exposed schlongs. I take a moment to ponder how that poor anthro stays conscious with that much blood rushing away from his head, and then I get on with my day. Again, it doesn’t affect my life in the slightest.

That’s just one example of how an anthro character’s human assets are what makes them potentially sexy, not an assumed desire on the part of the viewer to commit bestiality. The anthropomorphized part of the furry equation is essential. I don’t see furries lusting over pictures of actual cats.

From a cosplay perspective, people’s sex lives don’t even matter. Furry costumes are some of the most impressive, elaborate, and huggable costumes you’ll see at a convention. Furries at a con make me feel a bit like I’m at Disney World. In fact, I think it’s the Disney films that really helped make furries a phenomenon. Disneyland, after all, is The Happiest Place on Earth.

All cosplay is fantasy. Furries are just fuzzier fantasies.

If you’re lucky, your childhood is a happy time. The closer you get to adulthood, the more life starts to suck. So those characters you loved as a kid become a safe place you can retreat to when adult life becomes extra sucky. For me, one of those positive childhood associations is the Thundercats cartoon. I have a Cheetara cosplay. I did not know that my decision to put actual fur on the arms and legs of the costume was moving into furry territory. I just wanted to do something different with the character, because the original orange of the cartoon costume reminded me of the color of my real cats’ puke.

Is it possible to be an accidental furry? I don’t know. I don’t care. I don’t identify as a furry, but I can understand why someone would if Disney’s fox version of Robin Hood makes their life suck less. I’m not going to condemn someone for an innocent preference that makes them happy.

The 1980s and 1990s were a cavalcade of furry canons, with the Care Bears, the Get Along Gang, the Teenaged Mutant Ninja Turtles, Rescue Rangers, Tailspin, Darkwing Duck, and various other anthro animal series. With Disney’s Zootopia earning half a billion bucks and climbing, we’ve now got a whole new generation of furry fodder. As a cosplayer, I couldn’t be happier about this. 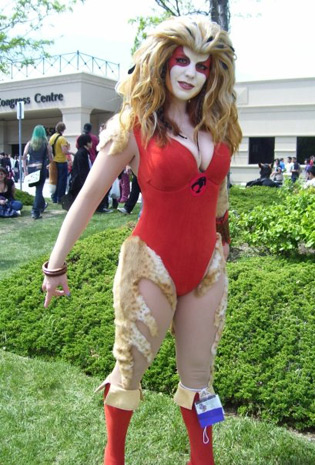 The bodysuit-style superhero costumes are hard on your body. Standing up straight and sucking in your stomach, getting those strong, sexy poses right… it’s exhausting. At the end of a convention day, my whole body hurts. I love the idea of wearing a costume where I don’t have to wear heavy makeup, where it doesn’t matter if I’m bloated, and I can just be a big, fuzzy, anonymous critter for the day. Fursuits are a totally different challenge in terms of costume making. Yes, they’re hot, but so are storm trooper outfits. The biggest thing holding me back is the mess I know the foam sculpting is going to make. Otherwise, it seems like so much fun to be furry, perhaps because the faces on the mascot suits are permanently smiling.

All cosplay is fantasy. Furries are just fuzzier fantasies. Some furries wear their costumes because they’re extremely shy. Others, because they love that particular character. Some identify strongly with a particular animal, and I don’t think there’s anything wrong with that level of intensity. Cosplay is about doing things that make you happy that are legal and safe. Without negative judgment.

So ignore the media and the message board slights. Furries are awesome, and I think they’re picked on so much only because it’s socially acceptable to mock them. When you really think about it, who are they hurting? What are they doing that’s offensive? Nothing.

The thing I love about furries is that they’re authentic enough people to admit to themselves that they enjoy something despite intense social shame. That’s something I can respect. It’s always odd to me that mascot suits are acceptable — even beloved — in some contexts, but not in others. Social norms often don’t make any sense, and they’re taken for granted by too many people. No one questions that a Playboy bunny is intended to be something red blooded men find sexy, and those costumes have anthropomorphized animal characteristics. People lust after Batman and Catwoman, so why sneer at anime cat girls? I’ve had some hilarious conversations with people trying to find the exact point when these pop culture characters would gain enough animal characteristics to be classified a furry.

I’m not pointing these things out to advocate that people should start wanking to Minnie Mouse’s pantaloons. What I’m saying is that a huge part of furry appeal is the safety these soft, cuddly characters represent, and I can’t help but love the cosplayers who aspire to embody that instead of muscles and cleavage.

You keep being you, furries, whatever animal that you is. You’re awesome.