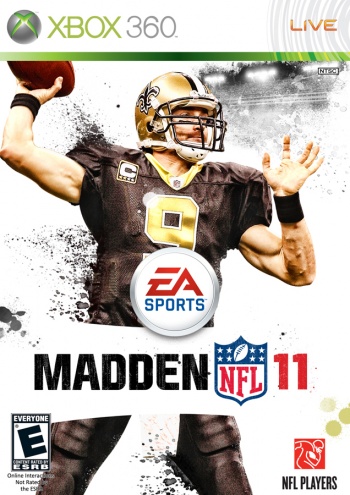 The Madden curse’s target for 2010 has been chosen. This year, it’ll irreparably harm Madden NFL 11 cover athlete Drew Brees, whom my people tell me is the quarterback (the man who yells hike and throws the ball) for the New Orleans Saints. They sound like a nice team of fellows, it’s too bad their quarterback is likely to fall in a vat of molten lead sometime within the next few weeks. The Madden curse came about from a series of injuries and poor seasons that have affected Madden‘s cover athletes over the years.

Brees was chosen through an online “Change the Game” vote sponsored by Doritos, which my people tell me is a triangle-shaped nacho chip covered in flavorings such as Cool Ranch and Jalapeno Popper. Doritos is all over the videogame industry in recent years, also appearing in Metal Gear Solid: Peace Walker and sponsoring XBLA development contests in the past, truly desiring to become the controller staining snack of gamers everywhere.

Brees beat out Minnesota Vikings defensive end Jared Allen and Indianapolis Colts wide receiver Reggie Wayne, two other sports athlete men. The New Orleans Saints have apparently been to something called the “Super Bowl” recently where they defeated an opposing team and became the best in the entire universe at playing with a ball and wearing helmets.

According to EA, Madden NFL 11 will have a new play-calling system called “GameFlow” that can automate the experience if desired. This wouldn’t be something I need as I always just choose goal line defenses and offenses, except when actually on the goal line. This strategy might not work out often, but when it does, it’s very embarrassing for my opponent.

What I find quite interesting is how many supporters of Madden tend to care more about the cover athlete than the game’s new features each year. What’s the big deal about he who graces said cover? Is it all because of the Madden curse, or has Madden become today’s Wheaties box?