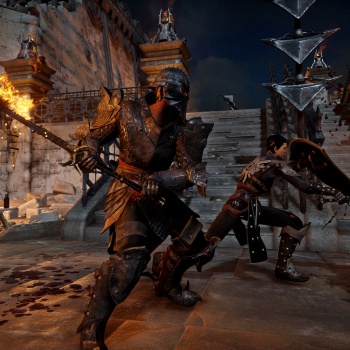 The style of combat in Dragon Age: Origins has returned.

I’m one of the vocal minority of gamers that actually thoroughly enjoyed Dragon Age 2 for its amazing role-playing and the fun of pulling off interesting combos in the action-based combat. But when I heard Mike Laidlaw, the creative director of the franchise, say that the tactical, top-down view PC players might remember from Origins was returning, I gasped. Not only will PC stalwarts like myself be able to pause and issue commands to your party in a view that makes sense, but console players will have the tactical view available too. The BioWare team realized that giving more options to players was much better than restricting them.

“You can play the game the way you want to play it,” said Laidlaw, pointing out the player can switch easily between following a party member in a third person over the shoulder view to the tactical camera. “There’s situations in which there’s advantages for both styles of play. I don’t want every fight to be fought using [the tactical view]. Sometimes you just want to quickly beat up some guys.”

Mopping up weaker enemies is also now a very real possibility in Dragon Age: Inquisition because the combat difficulty doesn’t scale with the might of the player. Foes that were tough when you started out will be a cakewalk later in the game, but of course that means there will be areas that are just too difficult to wander into until you’ve leveled up.

For example, the world area of Inquisition – we’ll get back to how freaking huge it is in a second – is dotted with dragons. They have returned, and you can spend your time and resources in tracking them down to be known as dragonslayer by the people. But be warned, the bits we were shown in the demonstration were terrifying; dragons move and attack with their breath in very deadly ways, and your party will be hard-pressed to take them out.

“Each dragon encounter is hand-crafted, and they are designed to kick your ass,” Laidlaw said. You don’t have to kill dragons, it’s optional gameplay, but every time you do you’ll get resources and prestige you can use to build up the Inquisition.

The Inquisition is what this game is all about, hence the title. The player character – which can be mage, warrior or rogue just like before – starts off the game re-establishing the ancient order of the Inquisition, founded long ago to stamp out corruption across all nations and borders. You begin the game poor and controlling no land, but as you go out into the world to take over keeps, establish bases, help people, or force them to heed you, your power grows.

But this is no empty game concept. Laidlaw showed how you can make decisions in how you govern your keeps, say to unlock new dungeons or areas, as well as engage in crafting systems to better equip your soldiers or make enough potions to turn the tide of war. It really did seem like an open world RPG in which you control a burgeoning organization.

The BioWare guys are a bit cagey as to the exact story of Inquisition, but the details they could speak of were about the continuing struggle between the mages and the Templars. On top of that, some disaster has injured the Veil, and the barrier between the Fade, where demons and magic come from, and the real world now has a few holes. Unfortunately for you, the holes spawn all kinds of nasties like undead and the mages and Templars are too busy fighting each other to deal with the problem.

“It’s a world out of balance,” Laidlaw said, hinting that all these events are too convenient to be a coincidence. Something, or someone, is behind it all.

Inquisition takes place in Ferelden, Orlais and the northern reaches surrounding Kirkwall from DA2. “It is the biggest game we have ever made,” Laidlaw said, and he’s not kidding. The areas we were shown ranged from temperate zones to deserts and swamps, and you can walk across them in a seamless manner. One area was called Crestwood, and Laidlaw said, “It is bigger than all of Dragon Age 2 put together. It will take you fifteen minutes to walk from one end of it to the other.”

I learned so much about this game that it’s impossible to mention it all, but it’s clear BioWare has doubled down on re-inventing the epic fantasy RPG genre. I saw echoes of Skyrim and Baldur’s Gate and even Civilization, but Inquisition isn’t a clear progression from any genre. Dragon Age: Inquisition will be in a category all by itself when it comes out in the Fall of 2014.