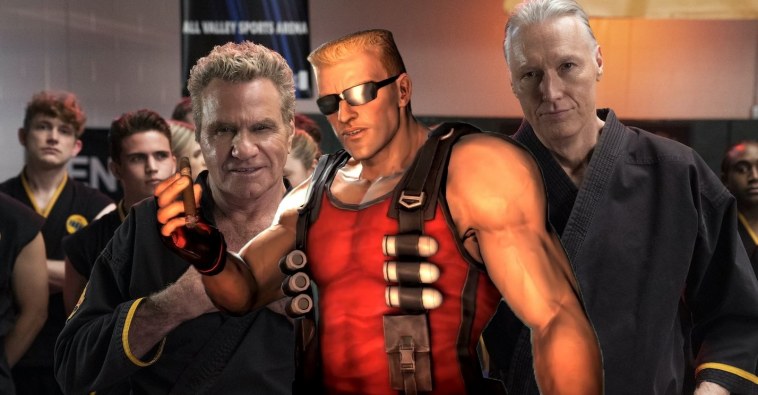 Cobra Kai creators Josh Heald, Jon Hurwitz, and Hayden Schlossberg are producing a Duke Nukem movie with Legendary Entertainment, per The Hollywood Reporter. Legendary obtained the rights from Gearbox, and the production team is currently seeking a writer for the project. The Duke Nukem movie has no director yet, but it is at least possible that the Cobra Kai creators may do it themselves under their production banner, Counterbalance Entertainment.

More than four years ago, Paramount was planning a movie adaptation of the franchise starring John Cena, but it never materialized. According to THR, Gearbox became more strategic about Hollywood adaptations of its video game IP afterward. This has so far resulted in the Eli Roth Borderlands movie at Lionsgate, which is supposed to arrive later this year and has a star-studded ensemble cast. Time will tell if both Borderlands and Duke Nukem live up to their big-screen potential.

The Duke Nukem franchise has had a rough go of things in video games for the past decade, if not much longer. Duke Nukem Forever had an infamously prolonged development and finally launched in 2011 as a maligned mess. However, Cobra Kai is one of the most successful and thoughtfully constructed revivals of any franchise ever seen, becoming such a massive hit for Netflix that the release of the fifth season has been expedited. If anyone can figure out how to make a quality Duke Nukem movie, it should be the Cobra Kai guys.