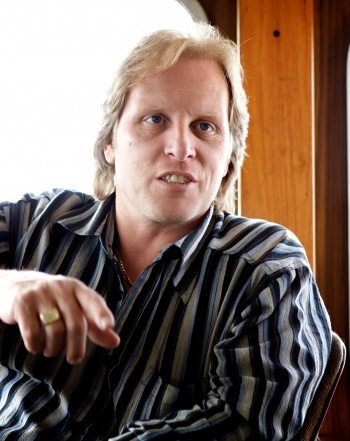 One of my favorite demos at E3 2010 was in the unlikeliest of places: The Discovery Channel booth. It was actually the Crave Games booth, but Discovery had co-opted roughly half of it to promote their upcoming game, developed by Crave, based on the successful television program Deadliest Catch.

If you’re familiar with the show, you know that it stars real-life Alaskan crab fishermen on their real-life fishing boats in the real-life Bering Sea. Crab fishing in Alaska is allegedly one of the deadliest jobs in the world, and these men – who brave the disaster-ridden waters off the coast of Alaska for just a chance at a high-dollar salary – are some of the saltiest, roughest men you’ll ever encounter.

The game, Deadliest Catch: Sea of Chaos, follows the first Deadliest Catch game, 2008’s Alaskan Storm. That game sucked, to put it bluntly, and Crave knows it. According to Crave representatives on the E3 show floor, the goal with Sea of Chaos was to make a game that was less accurate – less like actually driving a crab boat – and more like a game that makes the tedium of sailing and the drudgery of fishing fun.

The game is still under heavy development, so it’s hard to say if they’ve succeeded, but Sea of Chaos is a much changed experience. Players will select a boat from one of a selection based on boats from the show, and crew it with crew members based on actual fishermen. The game is played by selecting fishing zones, and then by playing a series of mini-games that represent the actual tasks performed by members of the crew.

In addition to showing a brief tech demo of a few of the min-games, Crave was also hosting Captain Sig Hansen himself, who was on-hand to promote the game. The Escapist spoke to Captain Sig about why the first game sucked, what it’s like to be one of the most famous fishermen in the world and whether or not he cares if the show’s other captains are jealous.

The Escapist: How you doing? This is not like fishing.

Sig Hansesn: I’m a little out of my league.

TE: How long have you been in town?

Sig: I just came in for the day. With the notoriety that’s been created, it’s crazy you know. I went fishing in March. I went to Europe, did a tour for Discovery there. I’ve been everywhere. It’s just been non-stop. Had a book that came out, hit New York Times bestseller list, all the PR for that. All the other stuff we’ve done on the side: Beer, fish sticks, fucking tartar, you name it. It’s really adding up and I’m fine.

Sig: I’d love to go on a boat. That’s the thing, once you get on the boat you get to clear your mind of all the other stuff. Like the game, it’s fun to do, it’s time consuming but at the same time – once in a lifetime deal. Right? Fuck it. Once you get on the boat, that’s where you’re so focused and in tune with what you’re doing, nothing else matters. It’s always been like that, but it’s always fun to go out there and just now I get to be who I am.

TE: So is going back a vacation – getting away from all this stuff?

Sig: Going back is reality. That’s reality. This is – it’s a lot of fun, but it’s not my reality. It’s a perk. And if it makes money, great, and if it doesn’t, I have my business. That’s my reality.

TE: Did you ever think at any point that you’d be making videogames and writing books and doing press tours? New York Times bestseller list?

Sig: The show’s been going six years. I’d say four years ago, I put my head to it and thought “You know what, there’s so much opportunity.” And as a fisherman, we’re always opportunists. I thought, “[This] can’t be that hard.” We should have a fish stick line, that just makes perfect sense. I get called to do a mattress commercial: Fuck off, I don’t sleep, why would I do a mattress commercial?

But six years ago, prior to the show, never. You live in a box and that’s all we have. That’s our life. And we still live in that box when I get on the boat. This has been so fun because you get to see how sales work, and how you get from A to B and how you make things happen. How do you make a game? How do you get it out there? How do you promote it? That’s kind of interesting.

Sig: The game itself was fun because all of the captains participated. Last time we did it, it was our game – my brothers and I. And that one, you know, first out of the chute. It’s not – I get it.

TE: Did that make the other guys jealous?

Sig: I don’t care. We’re buddies, it’s the system. Fuck ’em. It’s the same deal when you’re fishing. It just gets like that.

We got our voices in there now, and we got to do that. It’s all scripted, of course. They’d want us to say things a certain way and we’re just: “Fuck you guys.” We said it the way we’d say it in any situation, whether it was happy, sad or dangerous. So that’s what I like. I feel if you can’t be real or true to yourself with what you’re doing, you’re done. 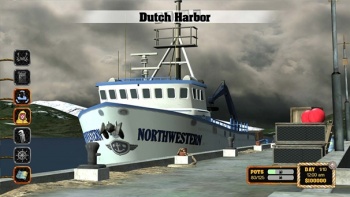 Sig: Right. They want us in it, but they also want you to just read by a script and to me that’s very boring. If you don’t put your personality into it, especially with this opportunity to make another one better, make it funner, make it more real. You gotta be real. Every line they gave us – different.

TE: Was there any point where they were trying to get the fishing or the running of the boat down – was there anything they just had wrong? Were they trying to tell you something about fishing for crab and were you like “I don’t think so?”

Sig: Not really, I think they got the gist of it. If I had 100 percent control, and I said: “this is how the game’s gonna be,” since I’m so biased, I think that it would be too hardcore. I don’t think people could play well and have fun, it’d be too hardcore.

What I’ve learned over meeting all these different people – you feel like an octopus everybody’s pulling – what I’ve learned is that you’ve got to find that happy medium – you’ve got to make it playable, not just for the hardcore people but for kids of all ages. That’s where you got to step back and say “OK, he’s the expert, I’m not.” I can try to make it good as much as I want, but you got to have that gray area because otherwise it will only appeal to such a small amount of people, there’s no point in it.

TE: You and your fellow captains might enjoy playing it, but –

TE: Do you play any games?

Sig: I’m not much of a game player. When we did the first one, I did it strictly because I thought we were getting so much feedback on our website. To me, all the questions that they were asking were questions that were like “Why don’t you do it yourself?” My daughters were playing videogames and I thought, shit, how hard can it be? Make a game, and then they can do it themselves. A lot of the questions relate to what they can learn from the game or experience, let’s call it. On a different level. On a land-lubber’s level.

TE: It’s kind of like watching the show. To me that’s what is interesting about the show is that I’ll never be on a boat like that in the Bering Sea but it’s cool to see what you guys go through. It adds another layer to my reality to know that you guys are out there doing that.

TE: What do you get out of the show?

Sig: The first year we did it, it was just going to be a three-part deal, and done. It just kept snowballing. Now, I’m trying to catch up to what I’m getting out of it. I can’t walk down the street without someone saying “Hey, you’re that guy. That’s Captain Sig.”

In reality, I’ve seen it impact our fisheries, I’ve seen it change politically for a lot of fisheries. Literally, it changed the way the fisherman and the Coast Guard co-exist together. Literally, that show has changed all of that. It used to be really bad.

The political side of the fisheries, we’d have to fight to keep it open. We have more clout now. Total difference. As far as work ethic (which is the main deal, that’s what it’s all about I think) it completely changed how people perceive their work. That’s kind of a pat on the back.

The blue collar guy, I mean shit man, you can’t walk down the street without a blue collar guy – I was in New York just last week, or the week before, and construction workers, they jumped out of their pants man. They were freaking out. It’s like the blue collar got a hero. They got the crab fleet as – we’re at the top of the fishing totem pole. They aspire to be that. That’s kind of neat.

TE: How long are you gonna go with the show?

Sig: Fuck if I know.