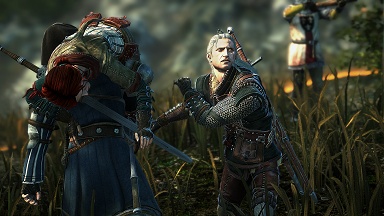 CD Projekt has reason to be proud of The Witcher. The studio claims its judgment was called into question for making a game in what was perceived as a dying genre for what was perceived as a dying platform. While that assessment seems extreme to the point of inaccuracy, I’m gratified to know that the company nevertheless managed to sell 1.5 million copies of The Witcher. It was, it seems, not only enough to keep the lights on, but also enough to justify a full sequel, The Witcher 2: Assassins of Kings. The company was showing the game at this year’s E3.

The second game follows the same general tone of the original; it’s still heavily focused on an adult-themed story and still has loads of combat and, of course, it still focuses on Geralt, the professional monster hunter of the title. After quashing the rebellion last time around and saving the life of the king, Geralt now finds himself on a quest to hunt down the assassins who have been killing rulers across the Northern Kingdoms. Along the way, Geralt will also take the opportunity to find out more about his own origins and his connection to the events transpiring around him. In true Witcher style, there will also be plenty of sex and violence.

The engine has been entirely rewritten to accommodate the branching story, multi-character dialogue system and new cinematics. We saw two sequences that showed off all three features to great effect. In the first, Geralt, his special lady friend, Triss Merigold, and a new character named Vernon Roche find themselves passing through a forest on the trail of a murderer. I won’t spoil the story except to say that they encounter an elf named Iorweth. He’s the captain of an elite unit that was destroyed in the recent war, and he and Roche seem to have had some sort of tension in the past. During the course of the dialogue, Iorweth and Roche do most of the talking, but the player, as Geralt, has the opportunity to interject from time to time with responses that are themed like those in Mass Effect and can steer the confrontation in a new direction. Things ended badly when we saw it, but there may be a way for Geralt to have a more calming effect on the encounter.

Moving on from that, we saw another encounter where Geralt, Triss and Roche come across a public hanging in a town square. Without giving too much away, two of the people being hanged are known to Geralt and he takes it upon himself to rescue them by talking to the guards and appealing to the public. The dialogue system here allows the player to select the general tone of Geralt’s responses without knowing exactly what he’ll say. I won’t spoil the outcome of this encounter either, but the ultimate resolution left me with the intriguing impression that we might have been able to do better.

The morally ambiguous world of The Witcher was never as concerned with traditional notions of good or evil as it was with the consequences of a player’s decisions. Sometimes this may be as simple as a particular NPCs reaction to your character, while other times it may mean the opening or closing of entire plot lines. The Witcher 2 is a non-linear game with three distinct plot lines and multiple endings. And unlike BioWare’s Dragon Age Origins, CD Projekt’s game is short enough that you’re likely to play through it multiple times to see how different decisions might affect the story. The player can even import their choices from the original game to add instant consequences and context to the world.

The team’s promised a much more fluid combat system this time around as well, with none of the click-tests of the previous game. Now Geralt can mix melee and magic attacks at will and use blocks, ripostes, and dodges to switch things to the defensive. For times when you may not want to completely kill your enemies, there are also options for fistfights in the game. More importantly, there’s now an easy option for combat for players who care more about the story and the exploration of the world and the characters’ motivations than the fighting.

The game is currently only being confirmed for the PC, but CD Projekt also says that the game will “surely be out on console at some point.” Just when that will be is unclear, but we’d expect to hear more about the company’s console plans later this year.