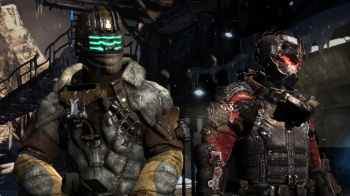 Dead Space 3‘s shift from horror to action is apparently for the good of the players.

Dead Space told the story of an isolated everyman tossed into a sci-fi nightmare. Its sequel got a little less scary and a little more shooty, but still maintained pretenses of horror. Previews of Dead Space 3 indicate that the series will shift further into the realm of shooters, and according to EA, it’s no accident – it’s simply trying to give players what they asked for.

“We were doing research coming out of Dead Space 1 and 2,” said EA marketing exec Laura Miele. “We received feedback to understand how we can take the game out to even more consumers.” Expanding the franchise’s audience seems to be the ever-critical end goal, especially if EA hopes to achieve its 5 million unit sales target.

“We were hearing feedback that they love the thriller game,” Miele continued, “but it was pretty scary, and the obvious next step was that they wanted to play with someone. So we introduced co-op into the game.” Miele said that despite the company of a co-op buddy, the game is “still true to its roots and no less scary.”

It’s hard to maintain elements of horror and desperation with a friend sitting on the couch next to you, but Miele doesn’t see it as a problem. “People felt far more comfortable playing it with someone else than they did doing it on their own,” she said. “Personally, I would rather go to a scary movie with my husband rather than sit at home with the lights out watching one on my own.”

I’m not sure why “player comfort” is such a high priority for a genre that exists to elicit fear, but I’m not the one with the product research. EA is walking a fine line between broad accessibility and core elements of survival-horror. As for how successful this plan will be, we won’t know until we step into the boots of Isaac Clarke (and/or John Carver) for ourselves in February 2013.