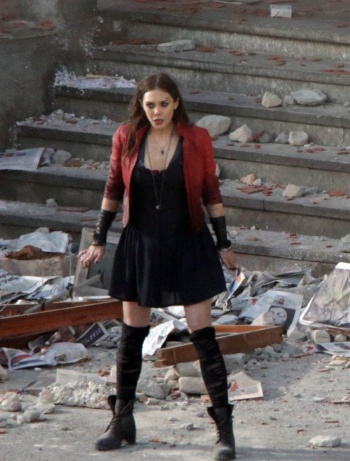 Actress Elizabeth Olsen is taking her role of Scarlet Witch in The Avengers: Age of Ultron into her life. Also acting in Godzilla, Olsen pointed to her portrayal of Scarlet Witch as the primary reason why she feels so confident physically outside of the movie.

“I don’t approach things like ‘I am the character,'” Olsen said. “I don’t think that would be healthy for me. I do think, doing things like The Avengers, I’ve noticed I’ve felt really confident recently. And I think it’s because I get to be very confident physically all day. I get to be a kind of grounded badass. And if that’s rubbing off on me, then that’s fun… It’s in our control to be positive or to be powerful or confident, even through people don’t think it is.”

Beyond acting for the screen, Olsen has also acted for the theater, although she can’t pick one favorite over the other. Acting on stage gives her the chance to move with momentum, whereas acting in a movie could mean spending an entire day doing a sequence that could last less than 10 seconds.

“I’ve actually been really interested lately in how people’s physicality can manipulate their emotions, as opposed to emotions manipulating someone’s physicality,” she said.

Movies also use a lot of editing, leaving some actors feeling out of control. Olsen takes a healthy approach to acting, seeing herself more as just a tool in the production. “I’ve been feeling more empowered recently,” she said, “that you’re in control of something, and to really take that seriously, even though someone else is ultimately in control of what the thing’s going to end up looking like.”

The Morality System in Games Has Outlived Its Usefulness

The History of Easter Eggs