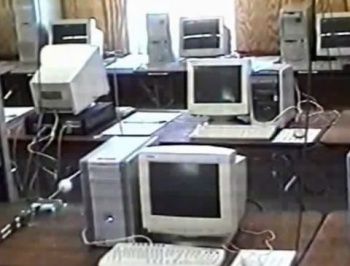 EMP blasts have been featured in stories and movies for years. Usually, the bad guys use the electromagnetic pulse to damage all electronic equipment at the hero’s base, or the hero stealthily sneaks an EMP device into the evil robot’s breakfast or something. What’s never been accomplished is a delivery system for an EMP that’s actually usable in modern warfare and not just in Call of Duty. That is, until a successful test in Utah of the CHAMP missile system from the Boeing Company knocked out computers in seven different buildings, including the video camera filming the test, all without causing any explosive damage.

The CHAMP – or Counter-electronics High-powered Advanced Missile Project, if you’re nasty – was fired over a few mock buildings at the Utah Test and Training Range in Western Utah. The target wasn’t Mormons, it was the electronics in those buildings and the monitors went dark after the missile blasted the building with high power microwaves.

“This technology marks a new era in modern-day warfare,” said Keith Coleman, the manager of this project for Boeing. “In the near future, this technology may be used to render an enemy’s electronic and data systems useless even before the first troops or aircraft arrive.

Now that the technology seems to be successful, and the Commander-in-Chief of the United States has reiterated his reliance on drone aircraft and military methods that don’t put personnel at risk, we might see CHAMP utilized on the next battlefield.

“We know this has some capabilities and some impact, we’re really trying to engage the customer to see if there is a way we can actually get this fielded and implemented sooner than later,” said James Dodd, vice president of Advanced Boeing Military Aircraft.

The “customer” he’s talking about can only be the United States Department of Defense. Unless he means Dr. Evil.