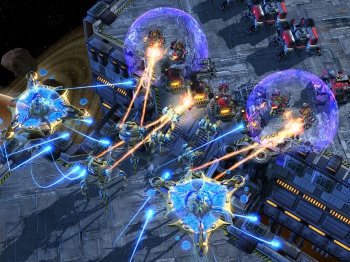 Lionsgate and OddLot Entertainment plan to plug the upcoming Blu-Ray and DVD release of Ender’s Game by sponsoring a StarCraft II tournament.

The producers of the Ender’s Game film believe there’s some overlap in esports and the film’s titular character training in Battle School. As such, Lionsgate and OddLot Entertainment have decided to sponsor a StarCraft II competition. This makes it the first time a movie studio has sponsored an e-sports event.

The tournament will be broadcast on Twitch and MLG.TV from Feb. 5 to Feb. 22 with 32 participants in the US. Titled “The Ender’s Game on Blu-Ray Tournament,” the sponsorship is for drumming up interest in buying Ender’s Game on DVD and Blu-Ray, set to release on Feb. 11.

Two qualifying matches will each feature 16 players and will run Feb. 5-9 on Twitch and Feb. 11-16 on MLG.TV. Viewers can vote for the final 4 of 16 competing in the MLG leg between today and Feb. 5. MLG invited 12 of the 16 players for its round: Scarlett, InControl, Kane, State, desRow, Major, Nony, Hendralisk, Vibe, Masa, Hitman, and Avilo. Twitch will reach out to “key StarCraft communities” for its round. Top qualifiers receive cash prizes and move onto the Feb. 22 championship round, which will be broadcast on Twitch. The grand prize is $10,000.

Ender’s Game is a film adaptation of the book by Orson Scott Card and is a military science fiction story in which children are trained to fight a predicted third invasion by an insectoid alien species. The main character, Ender, is revealed to be a tactical genius and becomes a battle leader at Battle School.

Superman and Jesse Eisenberg Face Off in Spoof Video