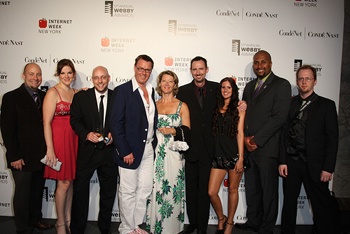 The Escapist team was at its most glamorous and witty as it wowed the crowd at the 12th Annual Webby Awards in New York City earlier this week.

Escapist CEO Alexander Macris made the best of the ceremony’s five-word limit on acceptance speeches when he wittily (and accurately) said, “Escapist magazine. We have issues.” We’re not the only ones who considered him clever – The Times Union noted his speech as one of its favorites of the evening.

The Escapist was honored twice, for both the Webby Award and the People’s Voice Award in the category of Game-Related Website.

Hailed as the “Oscars of the Internet” by the New York Times, The Webby Awards is the leading international award honoring excellence on the Internet, including Websites, Interactive Advertising, Online Film & Video, and Mobile Websites.