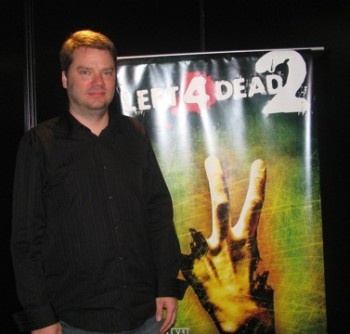 Valve’s upcoming Left 4 Dead 2 introduces new melee combat options that will let players massacre the undead with frying pans, baseball bats, axes and chainsaws, but the two missing fingers in the game’s original promotional material was too much for ESRB censors to bear.

As part of its E3 coverage Ars Technica posted a photo of Valve writer Chet Faliszek standing in front of a large Left 4 Dead 2 poster. Sharp-eyed readers may have noticed that the image behind Faliszek is a bit different than the ones we’ve seen since: The extended index and middle fingers are the same, but the ring and pinkie fingers appear to have been completely chewed off.

This, according to ESRB censors, crossed the line. Making a game about shooting, stabbing, hacking, bludgeoning and burning rapacious hordes of the undead in a desperate, blood-soaked bid for survival? That’s okay. Promoting it using an image of a hand with two missing fingers? That’s going too far, and Valve was told that it wouldn’t be allowed to use the image in future marketing materials.

Current promotional material now shows the famous Left 4 Dead hand with those two fingers bent back, rather than bitten off. The thumb, however, remains missing and presumed eaten, which leads me to wonder about the specifics of ESRB policies. Are thumbs seen as somehow less valuable than fingers? Does the ESRB have limits on the number of digits that can be chewed off by ravenous zombies? Who makes up these rules, anyway?

For the record, I prefer the look of the image with all fingers attached, but that doesn’t stop the whole thing from appearing just a wee bit silly on the surface.

UPDATE: The ESRB got back to me last night with the following: “The industry-adopted advertising and marketing guidelines can be found here: http://www.esrb.org/ratings/principles_guidlines.jsp. Those should answer your question.”

Fairly standard stuff, except the answer wasn’t really there at all. There are a few possibilities, however, in the “guidelines” for responsible advertising practices:

Graphic and/or excessive depictions of blood and/or gore, for example: Excessive and gratuitous amounts of blood and/or fleshy body parts, blood spurting from wounds – Doesn’t really apply, does it? The hand looks more desiccated than gory, there’s really no blood here to speak of.

Allusions or depictions of torture, mutilation or sadism, for example: Dismemberment, decapitation – Well, there are definitely some missing fingers in the original image. Problem is, there was also a missing thumb and it’s still missing. If the ESRB does have a specific acceptable limit of the number of digits that can be gnawed off by a zombie, I was unable to find it.

Allusions or depictions of necrophilia or any other sexual acts, for example: Sexual fetishes – Okay, that’s a stretch but I thought it was amusing that the ESRB has a specific advertising guideline against necrophilia.

Crude and/or offensive language, for example: Profanity, excessively violent/sexual ad copy, offensive gestures (e.g., giving the finger), offensive song lyrics, hate speech (e.g., racial epithets) – This is a possibility except, as has been discussed in the forum, the ESRB is a North American agency and the two-finger gesture is, as far as I know, uniquely English. I can’t see the ESRB making a fuss over a regional obscene gesture from another continent and if it is, European gamers should be very nervous indeed.

Bottom line? We still don’t know exactly why the ESRB gave the thumbs-down (so to speak) to the original Left 4 Dead 2 ads and unless Valve reveals the specific complaint we probably never will.

Does Using Google Make You Smarter?