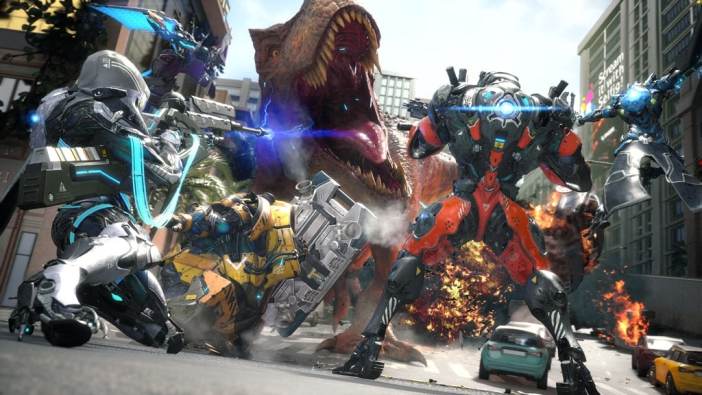 Revealed during the March 9 State of Play presentation, Exoprimal is a new multiplayer Capcom game that will let groups of players mow down hordes of dinosaurs on PC via Steam, PlayStation 4, PlayStation 5, Xbox One, and Xbox Series X | S sometime in 2023. The in-engine reveal trailer showed off five playable characters, all armed with Exosuits that seem straight out of Iron Man or Warframe. It’s a multiplayer experience where each character brings different abilities — such as air support or giant shields — to the table.

A few glimpses at gameplay tease city streets swarming with dinos of all sizes, but you can expect to see creatures falling from the sky and bursting through windows, too. Exoprimal does feature a dinosaur-related crisis, but this is not the Dino Crisis rebirth many may have been expecting from Capcom. For more on the game’s setup and story, you can read the summary below:

It’s 2040 and the planet is in crisis. Dinosaurs are appearing from thin air and laying waste to cities across the globe. Threatened by history’s deadliest creatures, the world turns to the powerful Aibius Corporation and its revolutionary technology for help. The company’s next-generation AI, Leviathan, can forecast where dinosaur outbreaks will occur and deploy Exofighters to the area. Armed with state-of-the-art mechanized combat armor known as Exosuits, these warriors represent humanity’s last hope.

Capcom says Exoprimal puts multiplayer and co-op elements first, but it has intertwined story elements throughout the experience. As players discover the secrets behind the dinosaur invasion, they will be able to experience a few game modes to keep things interesting. One of those modes is Dino Survival, which sees players engage in 5v5 matches as they race to complete missions before their opponents.