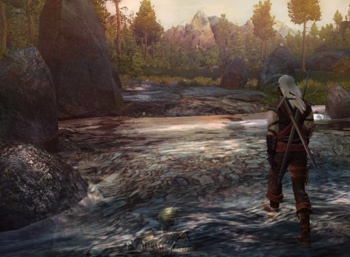 While CD Projekt teases Witcher fans with ARGs, a leaked video might just have revealed its new project.

The video, posted on GameTrailers by a fan, shows Jakob Stilinsky, apparently a game designer for CD Projekt, talking at length about the gritty RPG, based on the books of Polish writer Andrzej Sapkowski, being brought to the Xbox 360 and the PS3.

The video looks real enough, but interestingly, Stilinsky does not appear to have worked on the original game, and his name doesn’t seem to turn up anywhere except in relation to this video. The cinematics that Stilinsky talks over are from the original game and no new content seems to be being shown.

If it is real, it would appear that CD Projekt just can’t seem to get enough of enhancing The Witcher, as this new version apparently will have sharper graphics, new motion-capture animations, a new, more dynamic combat system and improved enemy AI. If that wasn’t enough, the game will also be built on a new unnamed engine that features dynamic lighting and shadowing, normal mapping and new vegetation, as well as full support for achievements and trophies.

CD Projekt has yet to comment on the video, despite pressure from the community to either confirm or deny its claims. If it is a genuine video, then console owners will finally get the opportunity to play one of the most talked about RPGs in recent times.