Cliches abound in fantasy literature. Elves are long-lived and lithe; dwarves are stocky and bad-tempered. Humans are usually prone to corruption, but there is always one boy who just may be the hero that will grow up to save the world. Fantasy role-playing uses a lot of clichés as well. The mage is squishy and needs to be protected by the burlier fighter. The duel-wielding drow swears that he’s nothing like the rest of his foul people. The paladin who is literally holier-than-thou. Beyond character, there is the cliché that all adventurers are out looking for loot and that dungeons are full of monsters guarding said loot. Upon further reflection, some of these clichés are necessary for good fantasy roleplaying and some are just useless. The ones that work are mechanical, while the fantasy clichés that are purely aesthetic are just overused and need to be thrown out.

Mechanical clichés are what makes fantasy roleplaying function. Removing them would require an immense amount of house rules and tweaks and I am not convinced that doing so would always end up in a better game. One that is discussed in this week’s issue of The Escapist Magazine is that every fantasy roleplaying setting is post-apocalyptic. In order to have dungeons and ruins populated with monsters that guard treasure the likes of which hasn’t been seen for generations wouldn’t be possible unless there was a technologically or magically advanced civilization that had somehow been destroyed.

Look at all of the classic fantasy settings of Greyhawk, Dragonlance or Blackmoor, and you will note that each had some form of Atlantis that had been wiped out of existence, but had left behind wondrous items of magical power. These are the items that player characters are always happy to collect. An apocalypse sets up the basics of fantasy rolepaying so brilliantly that you’d be hard-pressed to play a game that didn’t have some post-apocalyptic themes running throughout. Of course, that doesn’t mean that some people won’t try.

The idea that a player character starts off fairly weak and grows slowly in power over time is also integral to the idea of role-playing games. The examples in fantasy literature are easy to spot. You could say that Sam, Merry, Pippin and Frodo started out as 0-level commoners and that they gain experience throughout the course of the Lord of The Rings. Merry and Pippin became fighters (I’d say up to level 5 or so but that’s up for debate) while Frodo and Sam might have duel-classed into thief for their sneaking ability, finally reaching demi-god status and epic levels by traveling across the sea into Valinor.

Leveling up in role-playing games takes the abstract idea of getting more powerful by seeing the world and defeating monsters and makes it concrete with the concept of experience points. Killing the Witch-King on the fields of Pelennor gave Merry at least 3000 XP, maybe more. Without the mechanical cliché of slowly gaining power, there wouldn’t be much of a game to role-playing.

Roles in the party are also a necessary mechanical cliché. The physically weak but mentally strong wizard is as common a cliché as you can get, but without the inter-party relationship that such a cliché provides, there would almost be no reason for parties of adventurers to team up. If Marcus the Amazing could take as much of a beating as Falco the Brave, then why in the Seven Hells would he bear having such a weak-minded fool around? The whole idea of a group of characters, each specializing in a certain sphere of expertise, is a cliché that spans all kinds of genres, from fantasy to superhero groups in comics, to even the A-Team. Without the band of merry adventurers, fantasy roleplaying isn’t that much fun. 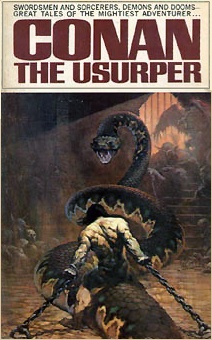 Aesthetic clichés are less important, but they have certainly infected the fantasy genre from its inception. The blame can partly be laid at the feet of the great authors who shaped fantasy in the 20th century. These authors were so skillful at creating evocative characters that roleplayers today want to emulate those stories around the table. I think that many aesthetic clichés, while useful in some ways, are ripe for change. It can be fun to play the clichéd character, but it is even more fun to throw away these clichés and play something original.

Robert E. Howard’s Conan stories forever cemented the idea that barbarians are berserkers who fight with huge two-handed weapons, crushed enemies, saw them driven before them, and heard the lamentation of their women. There’s no good reason for all barbarians to act this way, yet D&D created an entire class devoted to, well, playing Conan. By definition, a barbarian means not civilized, primitive. The word is rooted in the ancient Greek culture for roughly meaning “Not Greek.” Therefore, any class can be a “barbarian.” You don’t need to have rage, you just need to be skeptical of the benefits of a rigid society. Playing as a spellcaster or a fighter who rejects the notion that he must be “civilized” would be great fun.

The concept that wizards wear pointy hats, and are usually old men with long noses is just as annoying a cliche. I’m not sure exactly where this is derived, perhaps it’s an amalgam of Gandalf, Merlin and the wizard from those Where’s Waldo? books. In any case, I prefer wizards who wear clothes just like everyone else, not just robes covered in stars and comets.

I’ve mentioned paladins before as being a particularly overused cliché. Nowhere is it written that paladins need to be chivalrous know-it-alls who do not tolerate bad language or bawdy talk. Paladins merely must uphold the tenets of their deity. I’d like to see more Halfling paladins, who venerate their gods by drinking and eating heavily (of course, that’s a cliché too, but it would still be funny). Or a paladin of the god of love and beauty who makes it his duty to fornicate as much as possible.

And why are dwarves Scottish? I never understood where that came from.

We need clichés in order for fantasy roleplaying to be fun; leveling and character roles are part of what makes the game work mechanically. Some of aesthetic clichés exist because they are easily recognizable and, therefore, easy to play. The point is that although fantasy literature and roleplaying is rife with aesthetic clichés, there’s no reason for your game or character to follow suit. Make your character your own. Make him or her memorable. Just because you are playing the last noble member of an evil race doesn’t mean that you must use two scimitars and summon a large black cat to fight alongside you. For example, you could regret your choice to join “the good guys” and constantly rib your companions about what their missing from the dark side. That’d be a hell of a lot more entertaining than playing Drizzt #5.

Greg Tito’s last wizard was a drug addict who supported his habit by casting preservation rituals for grain caravans.