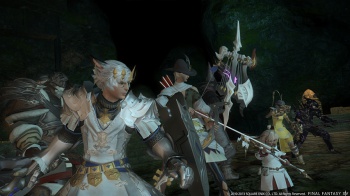 A member of the Final Fantasy XIV: A Realm Reborn community team cryptically hinted at “something hidden away” inside the game’s soundtrack.

The Final Fantasy XIV: A Realm Reborn soundtrack has a special something hidden inside of it, according to a member of the game’s community team named Bayohne. The team has revealed little else about the “something hidden away” other than the fact that it is hidden.

Specifically, Bayohne teased, “It seems that the soundtrack includes something else, something hidden away inside the data. We’ve gotten word that it’s locked and no one has figured out how to unlock it, but perhaps… perhaps using the name of the one from the ‘bridge’ would be the key to opening it? Hmm… I wonder!”

What the hidden something could be is a mystery to anyone who hasn’t found it already. A password is needed to open the file, which is named “Secret.” To figure out the password, think back on Bayohne’s hint: a bridge. For anyone who was looking forward to music from Patch 2.2, the secret is a welcome surprise. The password is already out on some sites and online communities.

Copies of the Realm Reborn soundtrack also include a bonus code for the minion “Wind-up Bahamut.” Final Fantasy XIV: A Realm Reborn launched last year for PC, PS3, and PS4.

See Bighead Thanos And More in This MegaCon Cosplay Gallery