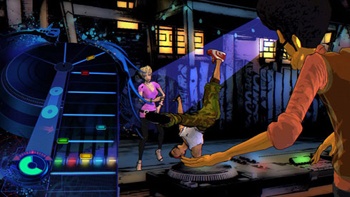 Kanye West, Beastie Boys and Black Eyed Peas are part of the first five songs to be part of the upcoming hip-hop rhythm title.

Revealed back in October 2008, Genius Products and Genco Interactive’s Scratch: The Ultimate DJ, has been a mystery to both the press and gamers alike, though a Rolling Stone article has helped shed some light on what has the potential to be one of the bigger rhythm-gaming hits of the year. The success of games like Guitar Hero and Rock Band have already knocked down the barrier of entry for potential music games, now it’s up to other developers to take the formula and make it more appealing to a wider audience. Namely, the hip-hop audience.

Due out in Summer 2009 for the Xbox 360, PlayStation 3 and Nintendo Wii, the track list for Scratch currently includes-

“Flashing Lights” by Kanye West
“Intergalactic” by Beastie Boys
“Let’s Get It Started” by Black Eyed Peas
“Slacker” by Tech N9ne
“Don’t Sweat the Technique” by Eric B. and Rakim
Along with additional music from Run DMC, Gorillaz, Nelly, Deltron 3030 and Mix Master Mike.

As the advent of plastic instruments has someone gotten it into peoples heads that these games should teach you something, producer and industry legend Quincy Jones III claims that, “If you learn how to play this game, then you can do the real deal.”

I’m a rhythm gaming dinosaur at this point, so you shouldn’t be surprised that this scares me a bit. I was actually hoping that Genius and Genco would simply take Konami’s Beatmania formula, slap some pretty graphics on it and make it more appealing to mainstream audiences because, let’s face it, it’s not like Konami is going to pull that off any time soon. Sega tried to make a realistic take on being the party starter with Crackin’ DJ, and while its fun to watch, it’s not exactly a joy to play. Rhythm games appeal to the most carnal instincts of gamers: pushing buttons really fast. I hope I’m wrong, because a good, hip-hop based rhythm title is tragically overdue.