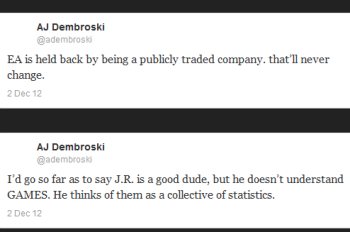 A.J. Dembroski had some interesting things to say about Madden, Electronic Arts and his coworkers during a recent outburst on Twitter.

Twitter is an interesting forum. It’s kind of like booze. You can’t get yourself into too much trouble with just 140 characters, after all, but then you post another message, and then another, and pretty soon you’re in full-on rant mode and saying things you’re going to seriously regret when you wake up the next day.

That may or may not be the case for ex-Madden NFL developer A.J. Dembroski, who unleashed a torrent of tweets a couple of days ago about his time working on the franchise. The whole thing started off well enough, with comments on the good friends he left at EA and a statement that the company “treats their people well.” But then it starts to go sideways.

“I’d go so far as to say J.R. [John Riccitiello] is a good dude, but he doesn’t understand GAMES. He thinks of them as a collective of statistics,” he continued. “I think Metrics are the worst things to happen to gaming. Breaks everything down to numbers, without the benefit of reason. So a football game wants to reach feature [parity] with Call of Duty… without the realization that theyre different fuckin games.”

And if you don’t care for how Madden 13 worked out, don’t blame him. “For the record, the only thing from M13 that I did that actually shipped was the draft class stories. Everything else was redone (poorly) by our asshole of a lead designer,” he wrote. “There were 4 designers on CCM… 3 of them competent. The incompetent one undid most of what we did and fucked it all up… I did a lot of the legacy tuning, but that got redone as well. Two other designers, one of which is gone, one is still there, worked their ass off to make things work, but again, their shit was undone.”

A few tweets later, the realization that he might not be doing his career any good seemed to set in, but he carried on anyway. “I’m so frustrated right now, and YOU people get lied to so much, I kinda feel like I’ll find something on Karma,” he tweeted. “but seriously… don’t trust EA. Not because they’re bad. They do good by their people, really. But because they’re robotic. Paint by numbers. They see video games as a collection of features. They don’t understand the artistic aspect of it.”

It’s a pretty epic blowout, and one that likely means he won’t be working in any EA-owned studios for awhile, but it also touches on a fairly obvious yet often unspoken truth. Electronic Arts isn’t “evil,” nor is Activision or Ubisoft or any other major publisher you care to name. They’re corporate entities, whose primary responsibility is to shareholders. Tale of Tales makes art; Madden makes hundreds of millions of dollars over annual iterations. You simply cannot have any meaningful degree of creative freedom with a property like that.

Dembroski deleted his outburst and has gone almost completely silent on Twitter, but alas, as we all know and keep forgetting, what happens on the internet stays on the internet. You can find out what he really thinks at pastapadre.com.

BioWare Hints at Big Things in Next Mass Effect 3 DLC