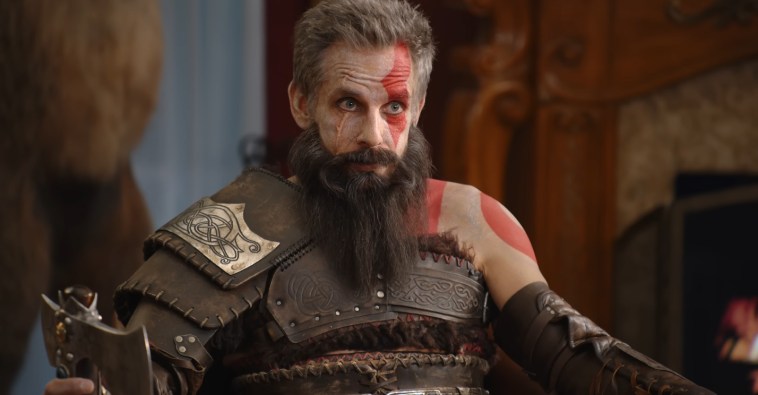 Winter is coming. Indeed, the release of God of War Ragnarok is almost upon us, launching in a mere eight days. The conclusion of Kratos’ Norse mythology arc has certainly excited PlayStation fans. Sony is capitalizing on this enthusiasm, as it has released a humorous TV ad for God of War Ragnarok today that stars Ben Stiller, John Travolta, and LeBron James and their children, poking fun at the parent-child relationship that exists between Kratos and Atreus.

Check out the celebrity-filled God of War Ragnarok ad below:

Ben Stiller, John Travolta, LeBron James, and their offspring really sell the silly premise of the God of War Ragnarok ad. Ben, dressed as Kratos, takes the role of therapist, asking how each pair is handling bonding. Every child/teenager is embarrassed by their parents and their obsession with tying everything to Kratos. It’s certainly a stupid idea, but so much so that it’s kind of charming and cute. I did chuckle watching John write Leviathan Axe into a journal and Ben’s constant shots at LeBron’s basketball ability.

You can find some more details about the commercial at the PlayStation.Blog. Most of the celebrity quotes are either tongue-in-cheek or clear pandering, but LeBron seems to be an actual gamer. I can see him and his son playing video games together.

God of War Ragnarok arrives on PlayStation 4 and PlayStation 5 on November 9, probably without Ben Stiller, John Travolta, and LeBron James.