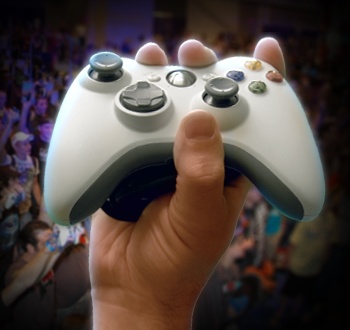 If you haven’t investigated Major League Gaming, you might be missing out.

There’s less running around involved in professional gaming than in something like football or baseball, but at its core, it’s still about highly-skilled competitors squaring off against each other. While competitive play might not be on every gamer’s radar, in Issue 270 of The Escapist, Greg Tito says that once he saw it all for himself, he understood the appeal.

The team looked stricken, the sweat of exertion dripping down their faces … Could they reach that last shred of stamina, that extra bit of adrenaline that their bodies were holding in reserve for just such a moment, wipe away all fatigue, and drive that last bullet into the heads of their enemies? … Drama is a big reason why we find competitive sports so compelling. The players’ battle for supremacy becomes our battle. When we watch a team defeat the opposition, part of their victory becomes our victory, just as their defeat becomes our loss.

I had only a passing interest in competitive videogaming or e-sports; as a gamer, I was happy that such leagues existed but I had never taken the time to watch or follow the proceedings. It was just a lot of noise … [but] when I saw the looks on the competitor’s faces when Final Boss began to feel that victory was slipping away, I found myself rooting for them; I wanted them to win. And in that moment, I became a fan.

Over the course of the weekend, Tito was able to overcome his preconceptions, and enjoy the event for the display of skill that it was. You can read more about it in his article, “Fan of the Game.”