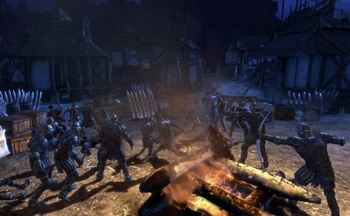 BioWare showed us a bit more of its next big RPG, Dragon Age: Origins and we liked what we saw. A lot.

When last we saw Dragon Age it looked good, but not knock-your-socks-off good. The plot seemed interesting enough and the combat looked fun, but it was hard to understand just why the game was taking so damn long. After this most recent peek at the game, it becomes much more obvious – the sheer scope of the flexibility that BioWare is hoping to achieve is simply staggering. It starts with the six different Origins – background histories – that your custom character can have. Each one will impact the elements of the game that you can access. Play with one Origin, for example, and the prisoner you encounter in the jail cell is just another elf; play with another, and he’s someone you knew when you were younger, opening up new conversational opportunities.

The Origins are one of the more obvious ways Dragon Age guides the development of the game; how much the various members of your party admire you is far more delicate. Every choice you make while in their presence, be it conversation or action, impacts how much they approve of you as a leader. Earn their admiration, and they become more loyal, fight better, and may teach you things you couldn’t otherwise learn. Piss them off and they may just leave you on your own – or even try to take over as leader themselves.

Your compatriots’ feelings towards you go a bit deeper than the basic good/evil we’ve seen before. In the scenario we saw, the village of Red Cliffs was under attack, and our hero was asked to help defend it. A noble endeavor, certainly, but one that has nothing to do with your main goal of defeating the Blight and fighting the Dark Spawn. Choose to defend the village sends the idealistic Leliana’s approval of you through the roof, but the more practical Morrigan and Sten will not hesitate to voice their displeasure at wasting valuable time.

Dragon Age‘s flexibility doesn’t just apply to story elements, though; it’s the backbone of the combat, as well. The Tactics System allows you to tinker with how each character behaves in battle, in as much detail as you like. Change everyone’s tactics based on individual battles, or just stay completely hands-off and stick to the defaults, if you can’t be bothered with deciding when someone should use a healing poultice and when they should cast Earthquake. You can also take control of any character in your party during a battle, if you’d rather be even more hands-on.

From all appearances, Dragon Age looks as though it’s combining the best elements of BioWare’s other classic RPGs; a toolset like Neverwinter Nights, fast-paced combat like Baldur’s Gate and genuine, emotional characters like Mass Effect. If it lives up to the potential that this preview displays, it’s going to be a truly remarkable game. We’ll find out late this year, when it’s released for Xbox 360, PS3 and the PC.