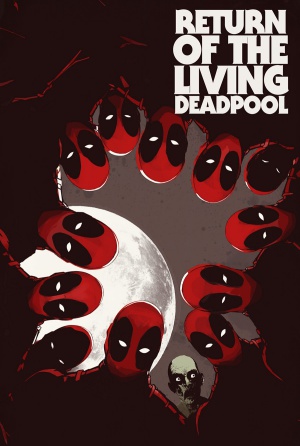 Marvel’s Return of the Living Deadpool #1 will release in stores and digitally on Feb. 4 with tons of undead Deadpools.

During a zombie apocalypse, Deadpool uses his healing factor to make any zombies who bite him transform into him, latching on to different aspects of Deadpool’s psyche, writer Cullen Benn (Magneto, Deadpool Kills The Marvel Universe) said in an interview.

A preview of the comic shows off a few pages and a variant cover by Ryan Stegman.

With a lot of zombies, that then means a lot of Deadpools. Of course, the different factions of Deadpools don’t get along, snarky mouth and all. Even Deadpool can’t stand Deadpool.

Earlier this month (spoilers) Nerdist reported Deadpool will be meeting his end in his series’ 45th issue (also known as the 250th if you include other mini-series), so if you’re really into the character, you’ll probably want to grab anything he’s in right now.

Return of the Living Deadpool #1 will be available to read starting on February 4.