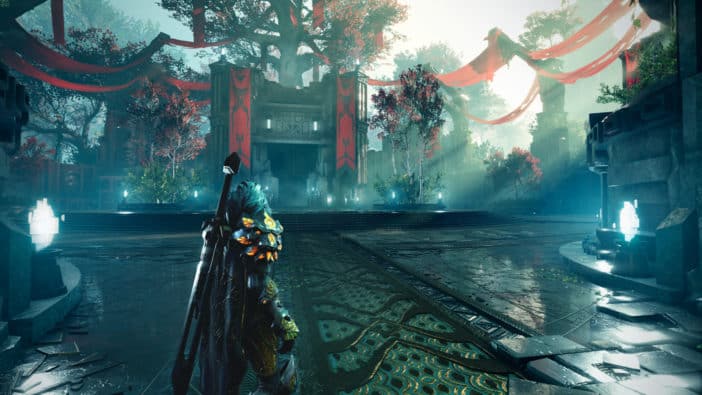 The gameplay walkthrough shows different classes of weapons, which have their own move sets and play styles. As players journey through Godfall, they will acquire numerous different weapons under each of the classes, with their own unique primary and secondary traits.

The Dual Blades are the fastest weapons in the game and are great against unarmored or single targets. The designated heavy attack is the Blade Cyclone, which can also be used as a finisher at the end of a light attack combo. Building up charge allows wielders of Dual Blades to activate Inner Charge, which inflicts massive amounts of damage in a short time period. The move Mortal Coil meanwhile involves throwing a blade at enemies and pulling them toward the Dual Blades wielder.

By comparison, Longswords are balanced weapons in Godfall, embracing simplicity in combo setups and consistent damage. Longsword wielders have three signature moves. Spectral Flurry deals high damage to multiple nearby targets and cannot be interrupted. Spiral Technique propels players in a straight line, cutting anything in their way.

More information about additional weapon classes as well as how to modify them will be revealed at a later date. It has also been confirmed that Godfall will not include any microtransactions. The game is set to release later this year for PlayStation 5 and PC via Epic Games Store.