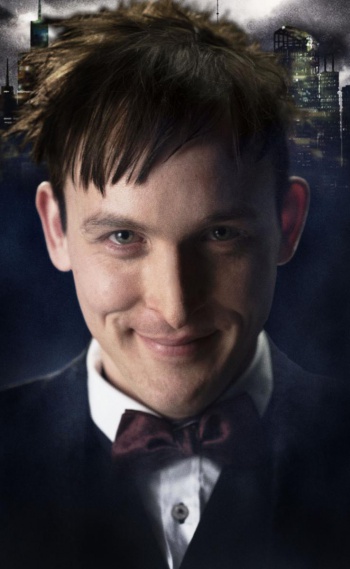 Fox certainly has been throwing its weight behind Gotham lately, with Bruce Wayne, Selina Kyle, and Alfred Pennyworth being featured in recent weeks. But as with any good Batman story, prequel or otherwise, a great deal of its strength will lie in its villains. And I’m not talking about Jada Pinkett Smith’s “Fish Mooney” (whoever that is); you need characters like Joker, Two Face, or Riddler reimagined before they became Gotham’s notorious criminals. The first to appear, but certainly not the least, will be Robin Lord Taylor as Oswald Cobblepot, pictured here as a low-level lackey within the greater Gotham underworld.

Batman fans will know Oswald Cobblepot as the Penguin, one of the oldest villains in Batman’s 75-year history. In modern continuity, Penguin is a genius and criminal mastermind who managed to carve out his own niche among Gotham’s mob families, even running “The Iceberg Lounge” nightclub while posing as a legitimate businessman. Gotham will apparently address the early days of Penguin’s career, working as a henchman for Mooney and dreaming of the day he’ll assume control of the empire.

From a visual standpoint, Taylor will be taller than how Cobblepot is usually portrayed, but still maintains a dapper and gentlemanly demeanor. Of course this is all for appearance’s sake, as Penguin is ruthless and sadistic, willing to kill anyone to achieve his goals. Taylor should provide a rather sinister interpretation of the character, although given Gotham‘s emphasis on child characters, I imagine the series won’t veer too far past a PG-13 representation. We’ll have to see when the pilot airs in the 2014-2015 television season.