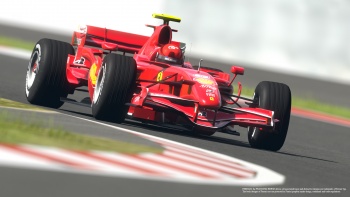 Polyphony Digital’s Kazunori Yamauchi says that Gran Turismo 5 is at a stage where it could easily be released right now. So why isn’t it coming out?

The Gran Turismo franchise is known for its immaculate attention to detail – that’s what makes it so drool-worthy for all the gearheads out there who won’t stand for anything other than an absolute commitment to realism down to the most microscopic level. There is a point, however, where perfectionism gets a little bit out of hand. Is Gran Turismo 5, which was proudly shown off with a jaw-dropping trailer earlier this week at E3, at that point?

GT5, according to series boss Kazunori Yamauchi, is “at a point where we can release it any time we want,” so why not just save all the fans out there the suffering of an even longer wait and put it out? Well, you see, Yamauchi wants to “release it as fast as I can…but we can always keep working on it. It’s very important for us to make sure everything is done perfectly and everything is done in detail.”

So Polyphony Digital can “always keep working on it,” which means that they could be working on forever. Who knows how long it’s been in a state that would, by any other standards, be more than good enough for a game to ship? Oh well. At least there’s Gran Turismo PSP, which will ship this October. Yamauchi, apparently, is planning some connectivity between the handheld GT and the PS3 one.

“We’re hoping maybe to make it so you can share the garage with the PSP version so that cars you unlock on PSP will be available immediately on GT5,” he said. For some reason I get the feeling that those cars will be sitting in your GT PSP garage for a good long time.