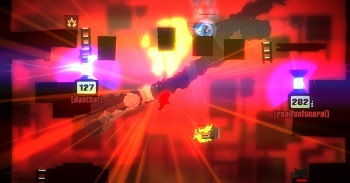 When Dan Marshall, half of the Ben There, Dan That team Size Five Games, was getting burned out on his upcoming stealth title The Swindle, he decided to work on a side project. The result was Gun Monkeys, a fairly simple multiplayer deathmatch title with time traveling simians. Despite “universally positive reviews”, it hasn’t sold enough copies to keep the servers filled with players. That results in a chicken-and-egg issue where nobody plays because nobody plays. To turn that around, Gun Monkeys will now hand out Steam keys to players stranded on empty servers. If no one else comes to join them, they can always tag a friend with a free game key.

“It’s a unique solution to a frustrating situation,” said Marshall. “The most frequent comment in my inbox at the moment is ‘this game is amazing, why aren’t more people playing it?’ Well, hopefully this move will bring in new interested players too, since they’ll always be able to play friends when servers are quiet… The important thing to do now is to make sure the people who have bought the game can enjoy it as intended.”

Marshall recognized what he later termed the “Curse of the Indie Multiplayer Game” shortly after launch, when he halved the price and included a free key with each purchase.