The various Disney brands have a singular ability to inspire strong emotional reactions in people. For me, Disney is a positive thing: Disney heroes and heroines tend to fall into “chaotic good” alignment in that they’re good people who don’t always play by the rules. Still, many parents recoil at the cornea-searing pink of the Disney Princess brand. The thing is, if a little boy dresses up like Sheriff Woody or Buzz Lightyear, no one thinks this is going to warp their young minds. So why is the reaction so very different when a girl wants to cosplay a Disney princess?

Yes, Princess merchandize is everywhere and we’ve all heard the Frozen song a million times. But now the Minions have invaded, and people don’t insist Pharrell Williams himself is a problem because Happy was so overplayed. I still don’t know what it is to feel like a room without a roof. So what’s the problem with princess dress up?

The assumption seems to be that the whole ultra-feminine princess mindset doesn’t give young girls the correct skills to be happy and successful… whatever that means. I hate it when people make childhood play sound like a seminar. Is part of a princess’ appeal the fact that she’s pretty? Sure. But a lot of female characters are pretty, but they don’t endure like Disney characters. That implies Disney’s dames are more than just attractive.

Disney princesses, based on the rules of their worlds, tend to be weirdos. They tend to tap into unspoken “girl world” insecurities, and affirm that it’s okay to be different. Don’t doubt for a second that Belle is a wildly popular cosplay because of the character’s bookishness and disinterest in Gaston’s muscles – or that Ariel appeals because of her overwhelming curiosity and fork hairbrush – or that Mulan is a favorite because she pretended to be a man to stop her father from having to go to war. And Merida from Brave wasn’t interested in boys. Scandal!

These heroines have “boy hero” characteristics like ambition, bravery, and resilience, while also affirming traditional “feminine” qualities like kindness and concern for others – even Snow White, the first Disney princess, is the “fairest of them all” as much for her kindness as her physical beauty. We take this girl power for granted nowadays, but Disney films should be praised for consistently featuring women in action-driven roles. While people were insisting that boys aren’t interested in stories about girls, Frozen came along and became the highest grossing animated film in history. 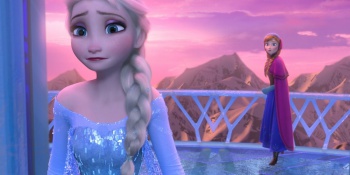 Elsa and Anna speak to the societal pressure for women to hide their flaws. The lyrics to “Let It Go” might even explain the motivations of many cosplayers: cosplay allows people to set free the things they may have to conceal in the rest of their lives. This is a big reason that the cosplay community reacts so strongly to slut shaming and fat shaming. Let it go people! Let it go!

Disney princesses also come from an increasing range of racial backgrounds – Jasmine, Mulan, Tiana, and Pocahontas appeal to cosplayers based on physical similarities. That being said, there’s no reason that cosplayers shouldn’t cross racial lines to cosplay the character they like best. A black Cinderella? An Asian Snow White? Go for it. Cosplayers are also adapting Disney Princess looks using mashups with Star Wars, Steampunk, Lolita fashion, and Marvel Superheroes to make these characters their own.

That’s a pretty amazing cosplay connection, especially for the first three princesses – Snow White (1937), Cinderella (1950), and Sleeping Beauty (1959) – who predate second-wave feminism. I think there’s a unique sense of continuity with these characters since multiple generations of women have seen the exactly same films. Against the framework of female competitiveness and older women facing ageism – AKA being “traded in for newer models” — having this shared feminine experience is powerful and comforting. There are very few non-Disney characters that have the same impact. Dorothy from the Wizard of Oz is one of the few I can think of.

Still, Disney has also had great success refreshing these older characters, and their corresponding villains, through live action films and TV shows like Maleficent and ABC’s Once Upon a Time, which have sprouted their own thriving cosplay followings. But I still think nothing compares to the original designs of Maleficent and the Wicked Queen. They just looked so freaking cool! Disney has an undeniable knack for villains that exude raw feminine power… even Jafar. Come on, he’s pretty.

I imagine that men connect to various heroes and sidekicks in similar fashion – the Beast is a popular one, perhaps because he’s an embodiment of being loved for something other than looks. And Big Hero 6‘s Baymax is a cuddly, sensitive character that allows bigger men to embrace that side of themselves, instead of having to be tough. Don’t worry guys. I’ll deal with this stuff in future weeks. Rock those tummies with pride! I got your back!

And don’t worry, furries, I didn’t forget about the Disney version of Robin Hood, Tailspin, Ducktales, The Rescuers, Darkwing Duck, and other anthro properties. You guys get a week all to your fuzzy selves.

I wanted to give the Princesses their own space because they’re uniquely seen as a menace to society. Also, If I didn’t limit the scope, I could write for weeks just about Disney. There’s so much variety that everyone can find a highly recognizable character that validates them. Some of the designs are extremely simple as well, and readily available around Halloween. In short, Disney cosplay, even the princess kind, is accessible. It could even be described as going to your happiest place on earth.

… and that was a terrible pun, but I’m not sorry.