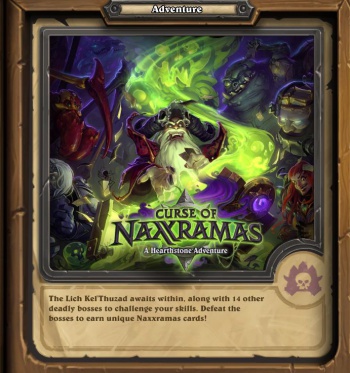 Is your Hearthstone collection tragically short on legendaries, but you still want to stroll through The Arachnid Quarter? Check back every week for another budget-friendly guide to clearing each wing of Naxxramas!

Hearthstone is designed to be readily accessible to players of all stripes, and the first expansion, Curse of Naxxramas is no exception. While the regular bosses aren’t all that tough to defeat, you’ll still want to plan ahead before you take them on. I’d venture to guess that your average Hearthstone player doesn’t have every Legendary in the game available to them, so I’ve assembled decks to take down all three bosses of the first wing of Naxxramas, The Arachnid Quarter, without having to spend all your dust.

Crafting each of these decks from scratch will cost less Dust than a single legendary, and, in some cases, will be practically free (given that you’ll need to have unlocked all cards for each class). They’re not necessarily the most elegant builds, but they’re effective, and, most importantly, cheap to assemble. Without further ado, let’s squash some spiders! 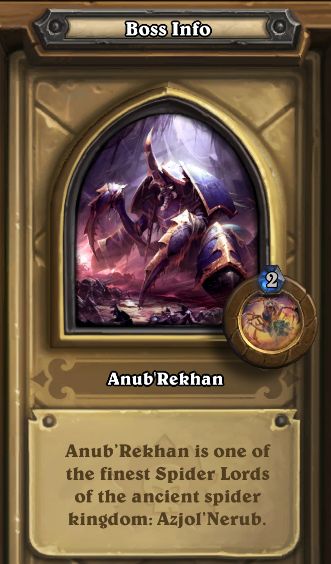 The first 8-legged boss combines Mage and Warlock class spells like Frostbolt, Shadow Bolt, and Mortal Coil with some of the new skittery critters from the Arachnid Quarter, like Shade of Naxxramas, and Haunted Creeper. The 2-mana Hero Ability creates a 3/1 Nerubian, which is easily countered with the Mage’s own Hero Ability, making the Mage your ideal class to take down this boss without breaking the bank.

The build I came up with contained only six Rare cards, which is on the high end for our purposes here, as well as 24 Common or Basic cards, with many of the Rares being easily replaced with non-Rares, should your Dust budget require it. The Rares in my build were Defender of Argus, Kirin Tor Mage, and Vaporize. Living the dream is dropping a Water Elemental as soon as possible, followed by Defender of Argus to buff and taunt it. Turn One Mana Wyrm makes for a very aggressive start, but you’ll sometimes need to forego casting a spell to buff it in order to keep it protected, as the AI seems to have it in for our poor Mana Wyrm. Secrets like Mirror Entity and Vaporize count as spells to buff your Wyrm, and help keep you caught up in the early game. The staple Flamestrike is great for clearing the board if Anub establishes any kind of real presence.

You’ll want to start fast and strong with Mana Wyrm, and cast spells to buff it and clear the path until you get to your Water Elemental. Polymorph will be your friend when they cast their Taunt guys, allowing you to swing freely at the face. Fireball is great for clearing out larger minions or just doing the last bit of damage to the opponent. If you’ve got Pyroblast, you’ll probably want to find room for that as well, as it offers a huge amount of late-game reach. 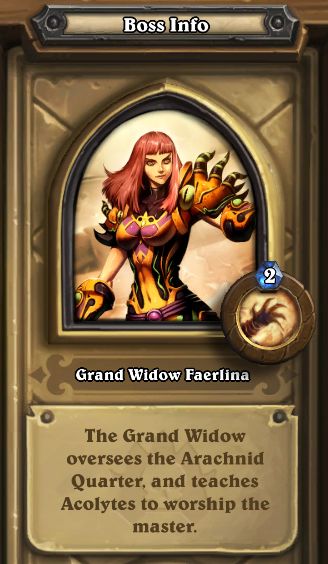 Boss 2: Grand Widow Faerlina
Ability: (2): Fire a missile for each card in your opponent’s hand.

Despite having access to both Priest and Warrior class spells, Faerlina’s ability is definitely the thing you should worry most about. Inner Rage was the most common Warrior spell in my experience, and was used as often to remove my one-toughness creatures as to buff her own. Dark Cultist is a new Priest addition with Curse of Naxxramas, and was easily the most commonly seen Priest card. Keeping in mind that your primary concern is her ability, the Warlock seemed the most prudent class to play, since you’ll use the card draw sparingly, but it will keep you going in the late game once you’ve dumped your hand.

The build I settled on for Faerlina actually contained zero cards above Common rarity, and defeated her easily. Focusing on cheap creatures with more than one toughness, emptying your hand, and Enrage abilities (which exploit the random missiles from her ability) the deck was easy to construct and play.

With Argent Squire, Flame Imp, Leper Gnome, and Voidwalker all at one mana, you’re frequently able to clear your hand early, voiding her Hero Ability. All of these creatures take more than one hit to kill, or create value when they die (Leper Gnome), so you’ll rarely get blown out by missiles. Running Amani Berserker and Raging Worgen, as well as Gurubashi Berserker for later in the game, you’ll be hoping she uses her ability, since there’s a good chance it’ll end up turning into a buff. Acolyte of Pain, similarly, is fantastic to have in play when missiles start flying, since each counts as a single source of damage, allowing you to draw multiple cards.

Demonfire, Mortal Coil, Soulfire, and Shadow Bolt are our removal pieces, which can take care of virtually anything she can throw at you. Demonfire doubles as a buff for an early demon as well, so don’t be shy about pumping your Voidwalker with it on turn two. Save your removal for larger creatures so you don’t end up trading too many of your own cards for one of hers, but it’s a simple rush strategy that should have you moving on to the third boss with ease. 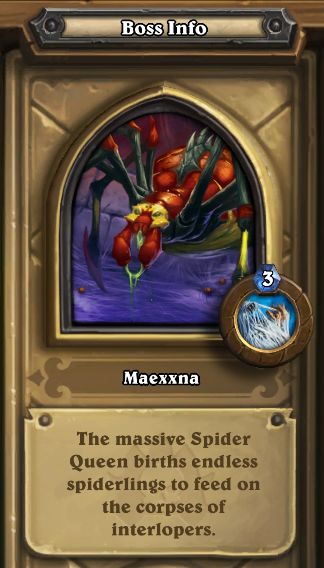 The final boss in The Arachnid Quarter is the giant spider Maexxna. She brings the Naxxramas class cards for Hunter, Shaman, and Rogue together into a spectacular mess of a deck. Using tons of spiders and beasts, as well as Necrotic Poison, a two-mana Assassinate, Maexxna can be surprisingly tough to beat, but shouldn’t take more than a couple of tries to take down. Taking advantage of her Hero Ability by stocking up on Battlecry minions, you can keep her from gaining too much of an advantage by bouncing your minions. Paladin’s Argent Protector is one of my favorite Battlecry abilities, and the Hero ability partially offsets Maexxna’s ability by creating throw-away minions to hit with the bounce, so I went with Pally for this build.

The Rares in this build are Sunfury Protector and Argent Defender, which serve to ensure that you’ll have at least one Taunt guy out, even after a bounce. Be warned, however, that Maexxna is quite fond of Sea Giant, an 8/8 that she can cast for free when the board is full of minions. I opted to go with a more aggressive approach, which simply wants to kill the opponent before they can kill you with an 8/8, but there are options like Humility and Equality that offer outs to an 8/8 giant that might otherwise ruin your day. It’s best to be as aggressive as possible, though, as multiple giants and Sludge Belchers can put a quick end to your offensive if you aren’t fast enough.

Have you managed to beat all three bosses in The Arachnid Quarter? Take to the forums with your own suggestions for how to take them down without breaking the bank! Have you tried Heroic mode yet? Keep an eye out for a not-so-budget-friendly guide to Heroic Arachnid Quarter soon!