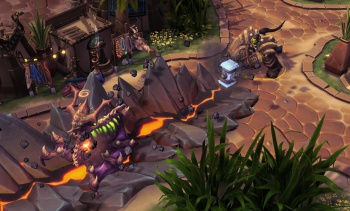 Heroes of the Storm has made the jump from Technical Alpha to Closed Beta, and has brought along a new map and Thrall for the ride.

For those of you who haven’t gotten their hands on Blizzard’s MOBA: Heroes of the Storm, your chance may have finally come! Today, the game officially transitioned from Technical Alpha to Closed Beta, and as well as sending out a boatload of keys to those who signed up for the Beta, Blizzard is also introducing a new map, a new hero, and Ranked Mode, to further entice those of you who were already in the Alpha.

The new map is none other than the Sky Temple battleground that Blizzard revealed at this year’s Blizzcon, and the new hero is the former warchief of the horde: Thrall, who was also revealed at Blizzcon, alongside Jaina and The Lost Vikings.

For more information on the Sky Temple, Blizzard have put together this neat little interactive website of the new map, which shows exactly how games in the desert-themed battleground will play out. There’s also some detailed info on Thrall in his official hero page.

The patch also introduced the much-requested “Ranked Mode”, which allows players (who are level 30 and own at least 10 Heroes) to queue up alone or in a party of up to five for ranked, competitive matches against other players of similar skill and party size. Naturally, ranked play comes with the “draft pick” mode of picking champions, that League of Legends and DoTA 2 players will be familiar with.

If you haven’t gotten a Beta invite yet, be patient! Blizzard is planning to send more invites out as the Closed Beta progresses.