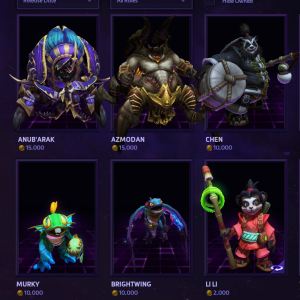 I love Heroes of The Storm. I love how Blizzard has taken the daunting, often overly complicated MOBA formula and stripped it back to its bare essentials, removing a large chunk of the pressure that can crush new and old players alike, and giving us an incredibly fun, simplified take on the genre. My friends and I are completely addicted and we play almost every day. There’s just one problem.

HoTS, I’m sorry. Your pricing structure … it’s just not working out. It’s because I love you so much that I want you to change. $10 for a single hero? $15 for a skin? Any way you look at it, your prices are just too damn high. But we can fix this! We can make you better than you ever were before.

Heroes of the Storm, League of Legends and Smite all also have a “free” currency that can be earned through regular gameplay, and used to unlock heroes permanently. Since Smite‘s Ultimate God Pack is such an amazing deal, let’s just focus on LoL and HoTS. In LoL, players earn “Influence Points” through normal play. Aside from a “first win of the day” bonus, the rate of IP gain is fairly consistent, with an average of around 215 IP per hour of play. In HoTS, you earn just 20-30 gold per match, with “daily quests” netting you an additional 200-800 gold per day. When you crunch the numbers, you’re looking at around 250 gold per hour (although that number does drop off considerably once you’ve finished your daily quest). 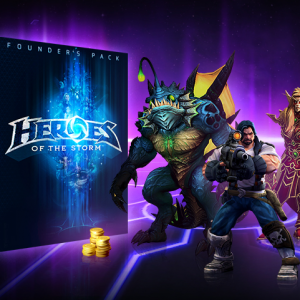 And here’s where it gets just a little bit underhanded. Leveling your “player level” to level 10 in Heroes of The Storm nets you 6,000 bonus gold. It’s a massive chunk of change, and most players can expect to earn it after around 10 hours of playtime. It’s a little trick used by casinos (and “freemium” smartphone games) to get players invested in their games, and it works the exact same way here – players fairly easily earn their first 10,000 gold, so they assume that the next 10,000 will be just as easy, by which time, they’re hooked.

It’s really disheartening to see Blizzard take this route. Blizzard has always been about making its games as fun and accessible to as many players as possible, and as it stands right now, it’s just not possible for the average player who can’t sink a whole lot of cash and time into the game to fully enjoy it. Of course, there is the suite of rotating “free heroes” – but they are only free for one week at a time, meaning players have to buy the hero if they want to continue playing it.

But there is a solution! In a perfect world, a DoTA 2-style system where all the Heroes are free and you only pay for cosmetics would be the best. But, alas, it doesn’t really look like that’s gonna happen. What this game needs is a “real” founders pack, not that phoney one with three heroes and a golden wolf. I’m talking about a single-purchase, Smite-style all-current-and-future Heroes pack. Obviously, Blizzard has a lot more brand loyalty than newcomer Smite, so $40 probably won’t cut it. I’ve discussed this with a lot of Blizzard fans, and the conclusion we’ve come to is that most players would gladly pay a one-time fee of up to $120 to never have to worry about grinding out Heroes again. Heck, even $120 for all Heroes included in the game at launch wouldn’t be too bad of a deal.

Note: This article is based on the current Heroes of the Storm beta. While Blizzard has stated that prices are unlikely to change before the game’s official launch, they are still, nonetheless, subject to change.