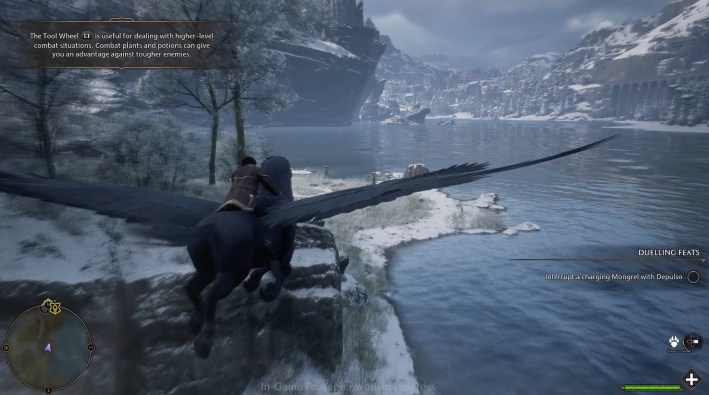 Warner Bros. and Avalanche Software have shown off more Hogwarts Legacy gameplay as part of their latest livestream presentation, showcasing things like broomstick flight, the Avada Kedavra “Killing Curse,” the Room of Requirement, an Onyx Hippogriff preorder bonus, and more. Today’s stream picks up right where the previous presentation left off, taking players on a flying broomstick tour around the grounds surrounding Hogwarts. Players will be able to customize their flying broomsticks, and some upgrades can be purchased too. All of the ways we’ll be able to personalize our flying broomstick haven’t been revealed yet, but you can at least expect to upgrade flight with more boost power.

While gliding around the castle on a personal broomstick might be the most low-profile way to get around, it’s far from the only means of traversal. Hogwarts Legacy also allows players to call upon mounts like a Hippogriff and Thestral. The gameplay showcase specifically highlights both beasts, with the Onyx Hippogriff available as a preorder bonus and the Thestral available as part of the Hogwarts Legacy Deluxe Edition. (Additionally, “The Dark Arts Cosmetic Set, Thestral Mount, and Dark Arts Battle Arena are available exclusively in the Hogwarts Legacy Deluxe Edition or for purchase in-game in the Dark Arts Pack.”) All means of travel look great so far, especially as the Avalanche team highlights how surrounding Hogwarts areas like Hogsmeade will look during different seasons like winter.

The Hogwarts Legacy gameplay showcase also spotlights two more key offerings: combat and the Room of Requirement. We’ve seen much from the former already. Players can create a loadout and combo spells together to create magical effects, but today’s Hogwarts Legacy footage also highlights unforgivable curses, such as the infamously deadly Avada Kedavra. Combat can get dark quickly, so it’s nice that players can retreat to the Room of Requirement, where they can customize and unwind to their heart’s content.

Hogwarts Legacy already promised endless adventure through one of the most magical universes in fiction, and today’s gameplay demonstration only hammered that home further. You can watch the Hogwarts Legacy showcase in full below for a better look at broom flight, Hogsmeade, the dark arts, the Room of Requirement, the Onyx Hippogriff preorder bonus, and more.

Hogwarts Legacy launches for PC, PlayStation 5, and Xbox Series X | S on February 10, 2023. As we learned yesterday, versions of the game on other platforms will arrive later, with the PlayStation 4 and Xbox One copies launching April 4 and the Nintendo Switch version launching on July 25.