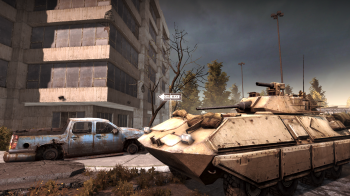 THQ has confirmed that Homefront has been delayed, but don’t shed too many tears because it’s only for a week.

In a call to investors yesterday following the release of THQ’s third-quarter results, CEO Brian Farrell revealed that the upcoming shooter Homefront had been pushed back slightly, from March 8 to March 15. A THQ rep later confirmed the delay with Joystiq, saying, “We moved our Homefront launch date by one week to March 15.”

So what does a one-week delay buy the publisher? Specific reasons for the postponement weren’t given but the best guess at this point is that it’s a bullet-dodge rather than a need to squeeze in more work on the game. Both Dragon Age 2 and Pokemon Black and White are slated to come out on the same day and while Homefront might be a good game – hey, it might even be awesome – there’s just no way it can punch with those two heavyweights. The THQ statement seemed to confirm that line of thought, adding, “We think we have a great opportunity to dominate retail on this date.”

Whether or not this will impact the European release of Homefront wasn’t made clear but U.K. retailers Game.co.uk and Gamestation currently still have the game slated for its original launch date of March 11.

Javier Bardem Might Be the Next James Bond Villain