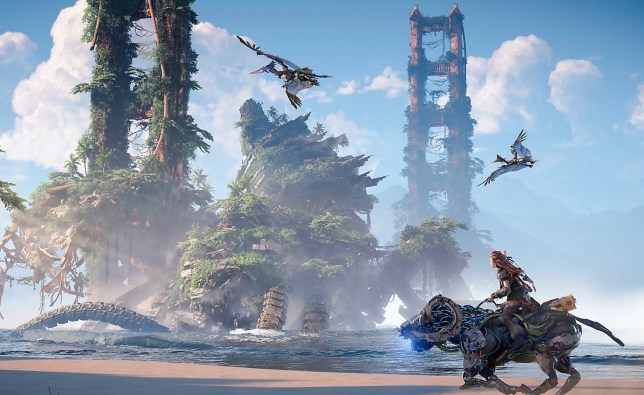 Guerrilla Games has confirmed it is making a Horizon online multiplayer game, in addition to more, separate single-player content, and it announced it is hiring for many open positions on these projects. An internal team is developing this “separate online project set in Horizon’s universe,” with a new cast of characters and “a unique stylized look.”

It's an exciting time to join us! We have many open roles across multiple departments, so check them out on our Careers page and apply today!https://t.co/G9tvnSkQQQ pic.twitter.com/Xqab1JGabV

Some of the job openings for the multiplayer project include positions for a lead quest designer, lead combat designer, lead world designer, narrative designer, and more. Some of the descriptions for the positions share a bit more about the project. The lead combat designer, for example, will “oversee development of multiple playable characters, their combat abilities, variety of enemies (machines and humanoid), and a variety of combat systems.” According to the senior machine combat designer post, the developers hope to “design, change and update behaviors of existing iconic machines of the Horizon franchise as well as design to introduce new machines.” Fans should also expect the Horizon online project to feature a “deep, complex story,” according to the narrative designer post.

Guerrilla added that it is creating more “epic solo adventures for Aloy” too. Horizon Forbidden West: Burning Shores is notably in development to release this April on PlayStation 5, but these job positions for the single-player project could also be for a third Horizon game for the future.

Today isn’t the first time we’ve heard about an online multiplayer game take on the universe that started with Horizon Zero Dawn. In October, MP1st reported that Guerrilla had begun work on a multiplayer entry for PC and PS5, believing it would feature co-op and customization features. That same report also claimed Guerrilla plans to remake or remaster the original Horizon Zero Dawn.

We know for sure the online multiplayer Horizon game is real now, but we’ll have to wait and see if the Horizon Zero Dawn remake exists as well. Stay tuned for more information about how Guerrilla plans to expand its gaming universe.