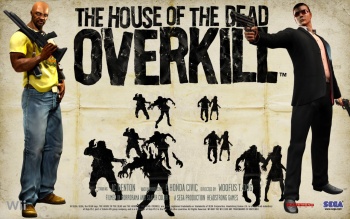 Guinness World Records has determined that House of the Dead: Overkill is the most profane game ever released, clocking in at almost 200 uses of the f-word.

It might not be topping sales charts, or even review charts, but House of the Dead: Overkill has topped another kind of chart and landed itself a Guinness World Record – for its profanity. The script for Sega’s zombie-rail-shooter clocks in at a whopping 189 counts of the word “f**k.”

That’s no small feat, either, given that, if the press release is to be believed, the game itself only has about three hours of “relatively limited” dialogue. The combined f-bombs total up to more than a minute of swearing (at three f**ks per second). Another way of looking at it – the word makes up 3% of the game’s entire script.

What other games can boast an impressive 1:33 f-word:non-f-word ratio, huh? Not many. The new record will be listed in the 2010 Guinness World Records Gamer’s Edition. Kudos to Sega for this, uh, honor.