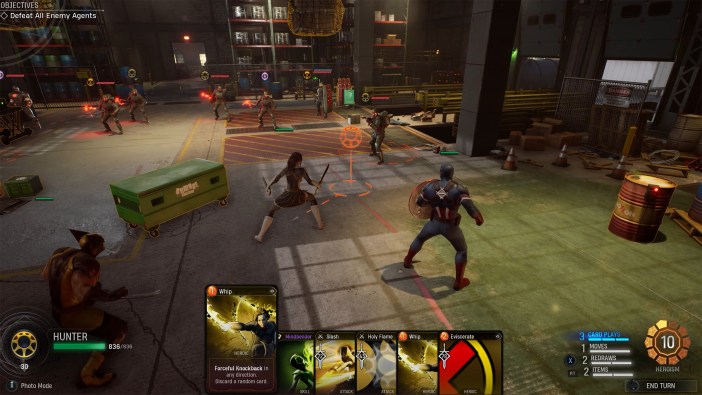 Marvel’s Midnight Suns might be from the makers of the rebooted XCOM series, but combat isn’t all about cover and hit percentages. In fact, it’s pretty far removed from that alien-zapping series. So just how do combat mechanics work in Marvel’s Midnight Suns? Here are the answers.

Marvel’s Midnight Suns Combat Mechanics Are All About Cards

Marvel’s Midnight Suns’ combat is turn-based and uses a card-based system to handle combat. That might sound like an odd design decision, but it’s actually straightforward. Here’s how it works.

Firstly, you take three characters into combat. You usually choose who these characters are, but some levels require you to use certain heroes. Excluding DLC, there are 12 Marvel heroes to choose from and one new one, the Hunter, the character you control outside of combat.

Each character has their own selection of cards; they start with just a few, but you can unlock more as the game progresses. To use those cards, that character needs to be involved in the battle. So if you want to use Blade’s “Stake” ability, but you haven’t brought him along, you’re out of luck. You can’t just portal him in.

Once combat starts, the game will select a handful of cards from your selected characters’ decks. It does this each turn and the cards don’t run out, so you won’t find yourself with an empty hand. The cards fall into one of three categories: attack cards, skill cards, and heroic cards. You can typically play three cards per turn.

Attack cards deal damage to enemies and can be used straight away.

Skill cards let you heal allies, protect fellow superheroes, and so on. 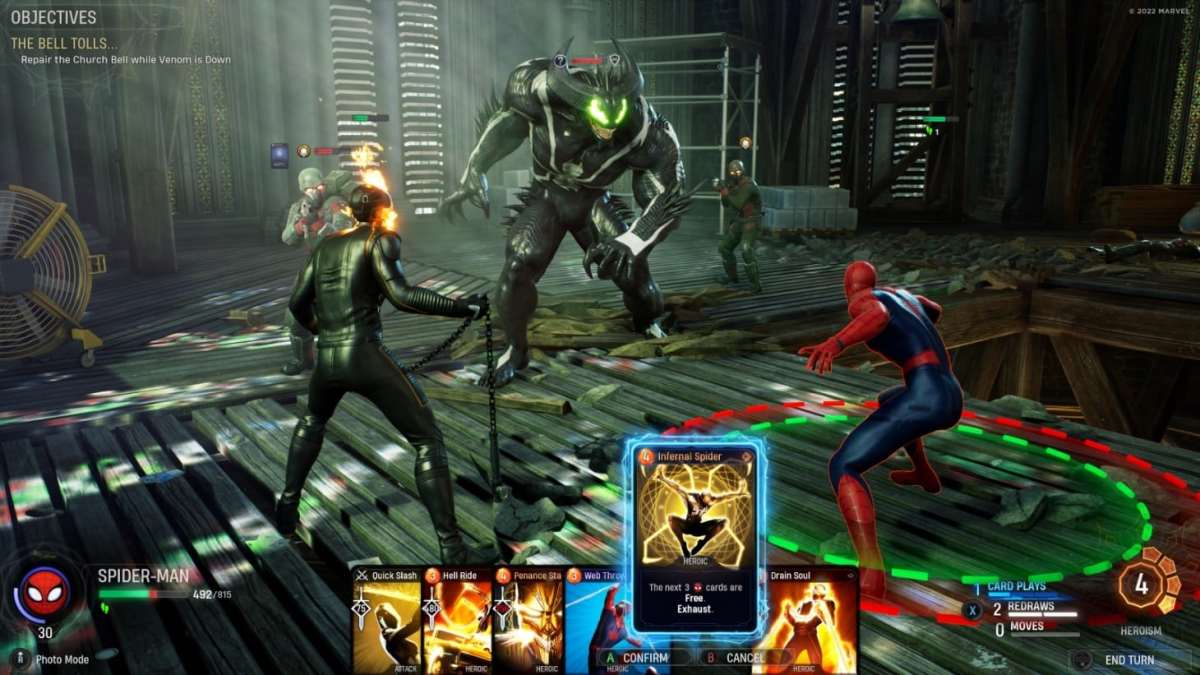 In the combat mechanics of Marvel’s Midnight Suns, there’s no ducking behind cover to avoid enemy attacks, but there’s no worry about whether you will or won’t hit a foe either. Attack cards and heroic cards have a little sword on them, which is how much damage you’ll deliver.

As for your enemies, if an enemy has a health bar above their heads, you’ll need to do enough damage to bring that number down to zero. They’ll then be knocked out. If there’s no energy bar, a single attack will knock them out. So choose your targets carefully. It’d be a waste to use, for example, Blade’s Stake attack (which does 25 points of damage) on a grunt.

Aside from playing a card, you can also move one character elsewhere on the play area, though you can only move one character per turn. There are two reasons to move units. Firstly, some attacks hit multiple foes, so by moving, you can line your attacks up with other enemies. Secondly, if you get close to a battlefield object, you can use heroism points to throw that object at an enemy. That won’t cost you a single card, and you’ll still do some significant damage.

However, if you don’t like your cards, you can redraw them, which will cost you one redraw point. (Check the screen to see how many you have left.) You may get better cards; you may get worse cards.

Once you’ve made your move, it’s the enemy’s turn. The icon above their heads will show you which enemy they plan to attack, so before you end your turn, you may be able to use a skill card to protect a targeted character. But once they’ve started attacking, you just have to wait for their turn to be over.

Rinse and repeat until, hopefully, you’re the last ones left standing. Pay close attention to your cards — some offer benefits like letting you use an extra card play, effectively giving you four or more card attacks per round. It’s more flexible than the traditional turn-based action point system, and it makes combat mechanics in Marvel’s Midnight Suns more fun.

Now you know how combat mechanics work in Marvel’s Midnight Suns. The more time you spend playing, the more you’ll come to appreciate its combat system. So, good luck saving the world.