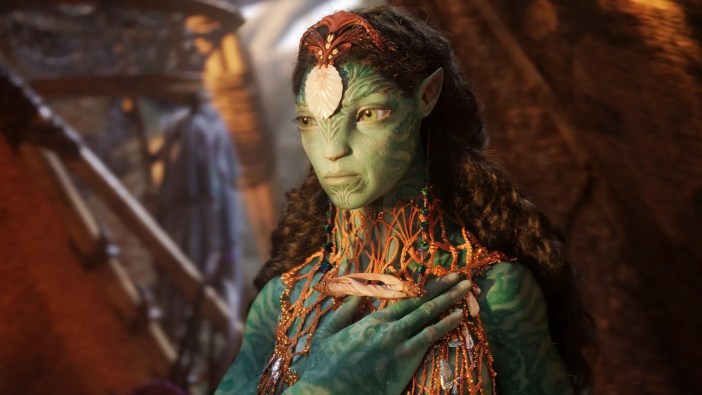 Avatar 2, or Avatar: The Way of Water, is here, 13 years after James Cameron’s original hit screens. The production budget of the original CGI-heavy blockbuster ran to nearly $230 million, and it went on to become the highest-grossing movie of all time. But if we’re talking about how much it cost to make Avatar 2: The Way of Water, the budget goes even higher.

Avatar 2: The Way of Water Likely Cost Well, Well Beyond $250 Million to Make

James Cameron has remained tight-lipped about Avatar 2’s production budget, but initial estimates put it at $250M. However, various sources, Hollywood Reporter included, have suggested that it’s between $350M and $400M. While both this movie and the original feature some physical sets, they also make serious use of computer-generated imagery or CGI.

We’re not talking about a few splats of digital blood or an abomination that bears a vague resemblance to Dwayne “The Rock” Johnson. While the movie’s human actors do perform motion capture, none of the Na’vi characters exist outside of a computer. The same is true of the bulk of Pandora’s eye-catching landscape, and none of that comes cheap.

Avengers: Endgame’s production budget was around the $350M mark, and it used it to great effect, since for a while it beat the original Avatar to take the highest-grossing movie crown. But then after being re-released in China, Avatar reclaimed its title, having grossed $2.8B total.

Director and co-writer James Cameron is no doubt hoping this sequel will eclipse the original, though it’s worth bearing in mind that $250M – $400M figure is only the estimated production budget. 20th Century Studios, who is in turn owned by Disney, could have set aside a couple of hundred million to market the movie.

So how is it doing? Pretty well so far — it made $53M on its opening day, Friday, December 16. Avengers: Endgame did rack up $157 million on its opening day, but what Disney and Cameron will be counting on is Avatar: The Way of Water having real staying power. Well, that and its clearing the $2 billion it apparently needs to turn a profit.

But what if the movie doesn’t make its money back? Is that the end of Avatar? Given that Cameron has a large portion of Avatar 3 in the can, filmed back to back with Avatar 2, probably not. But since Cameron already described The Way of Water as “the worst business case in movie history,” it would likely make Disney very, very nervous.

That’s everything we know about how much it did cost to make Avatar 2: The Way of Water.

Related: How Do The Na’vi Reproduce in Avatar? on We Got This Covered