Last column we continued our in-depth focus on judging the game with a discussion of “rules lawyering” and a process for fairly and consistently adjudicating rules. This week, we’re going to turn towards a more practical element of being a gamemaster: actually sitting down and running an RPG session.

Running an RPG session, especially your first time, is hard, and a first-time gamemaster can quickly make a mess of things. On the other hand, a well-practiced and experienced gamemaster can make hosting an RPG session seem easy; he or she knows all the secrets for gathering folks, getting them in the head space to game, and then running them through. Let’s talk about what those secrets are.

One of the first challenges you face in deciding to host an RPG session is determining when and how long you’ll play. In “The Challenge of Campaigning,” I argued strongly in favor of a weekly schedule for games, at a minimum bi-weekly. What I didn’t discuss was when, how long, and where they should run.

I generally have had the most success in running groups for long-term campaigns on Mondays or Thursdays. The specific day is going to depend on your and their schedules, of course, but by avoiding the precious weekend nights you take a lot of pressure off the participants. Mondays, in particular, have worked out well as they give the weekend beforehand for campaign preparation if needed.

After years of trying various patterns of play, I’ve found that a four to five hour session length is optimal. Four to five hours is, not coincidentally, about the length of dinner and a movie, a tailgate plus football game, or a concert plus drinks. If you play after work, it means you can play at 7pm and wrap up before midnight, which fits comfortably into most people’s after-work schedules.

For venue, a quiet room with comfortable seating and a large table is ideal. I’ve found the best choice is the gamemaster’s home, provided he has a large enough table or living room. Of course, if one of the players has a dedicated game room where you can have rules and miniatures spread out, go with that. I generally avoid trying to run games in public places such as game stores or coffee shops, because it’s loud and uncontrolled, which makes it hard for introverts to feel immersed and comfortable. That said, if you have a villainous spouse, sometimes it’s your best option. Whatever you choose, it’s best to find one venue for your campaign and stick with it. You can try to make a rotating venue (one in which each player hosts for a week, for instance) work, but I guarantee that the “friction of war” will frequently cause tardy and lost players who end up at the wrong location. 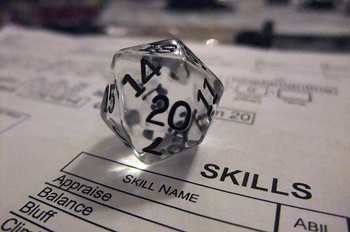 Role-playing games are best enjoyed with food and drink. Every party’s taste in refreshments will vary, of course, ranging from the traditional Mountain Dew and chips to Vitamin Water and diced vegetables, but your party can’t be expected to defeat the dark lord on an empty stomach. Nor for that matter can you speak for five hours on a parched throat.

I’ve found a simple technique to always ensure there’s a large and varied supply of food and drink at each gaming session: I offer bonus experience points to players that bring munchies. This works in every campaign. In my Classic Dungeons & Dragons campaign, I offer a 5% bonus on experience points earned in the session; in my Mutants & Masterminds campaign, I offered 1 extra Hero Point; and in Cyberpunk 2020 it was 10 bonus improvement points. To kick things off, you can even offer an additional bonus (+5% more) to whoever brings the best array of refreshments.

One important note on refreshments: Beware the drunken gamer. Whether the party is attempting to role-play or devise battle tactics, a drunkard gets in the way and ruins the experience of the other players. While we keep beer on hand, we also maintain a hard and fast rule at our campaigns that anyone who gets drunk is ejected from play. We save our serious drinking for beer-and-pretzels board games, or visits to the local inns and taverns.

With a half-dozen or so friends gathered around the table, gossip and small talk is a certainty. The players can easily chat away for hours and then complain that they didn’t have enough time to play. It can seem rude or intimidating to interrupt everyone and demand their attention on Your Game, but that’s your job as GM. I like to give everyone about 10 minutes to get settled, and then start the game. I find that having a routine to open each session really helps send the signal that it’s time to get started.

In our Classic D&D campaign, I open each session by playing an epic trailer soundtrack while I read a half-page session recap of the last installment. It reminds everyone of what went on in the last session, and usually prompts roars of laughter, a lot of “oh that’s right,” and pledges of renewed vengeance or greed. After that, I quickly describe where the party is, and ask them what they want to do. 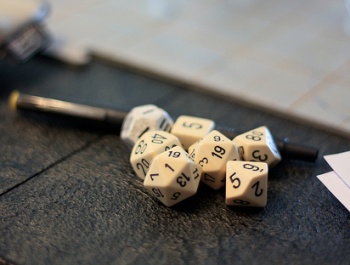 This technique, of describing the scene and then asking the players what they want to do, is one of the main tools in any gamemaster’s arsenal for maintaining the pace of the game. Plan to use it frequently over the next few hours. Anytime the players get bogged down arguing for more than 10-15 minutes, or seem like they are at a loss as to how to proceed, give them an updated summary of the situation at hand and ask them for their actions. It will usually trigger them to do something. Be sure to mention how long it’s been since the last update you provided, what people are currently doing, any objects they haven’t yet explored, and offer some sense that time is running out.

For example, consider the following description, offered to a party that isn’t sure what to do next: “You have been standing in the vampire’s tomb arguing in hushed whispers for the past ten minutes, unsure what to do. Viktir lurks in the corner, while Marcus is eyeballing the exit. A black curtain hangs across the south wall, covered with dust and cobwebs, untouched in centuries. In the distance you hear low groaning.” The party might decide to head for the exit, or check out the curtain, or get ready to fight whatever is groaning, but they’ll do something.

After about four hours of play, it’ll be time to wind the session down. When the session ends, if the party isn’t in a safe area, be sure to record how much damage (or equivalent) they’ve suffered, spells or mana expended, and other notes on their condition – players are not very incentivized to remember that, after all!

If possible, it’s courteous to maintain your scheduled duration as a hard deadline. The major exception to this rule is that you should never end a session in the middle of a fight – Not only is it bad for immersion, it’s quite hard to keep track of the tactical details after a week. The ideal way to end the session is after a hard fight or dramatic encounter, about 10-15 minutes before everyone needs to head out. After a good game, there’s usually an enjoyable “post game recap” where people discuss what happened. It’s fun to review your own game, and it’ll provide valuable insight to you as to what people most liked and disliked in the session.

In future columns, we’ll move into the details of running violent, visceral combat, role-playing memorable encounters, and other techniques for the expert gamemaster.