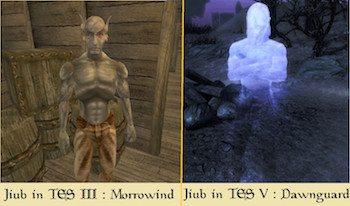 “Where Are They Now”, TES Edition.

I’ll admit, I never found much continuity to follow in The Elder Scrolls. They all take place in different lands, often hundreds of years apart from each other. Yet, some eagle-eyed fans noticed the common threads, and constructed a massive list of the NPCs that carry over from game to game. Spoiler alert: not all of them end well.

For example, remember that alchemist in Oblivion who had you collect Nirnroot to study? He eventually journeys to Skyrim in search of Crimson Nirnroot, where you can still find his arrow-studded corpse. There’s also the dark elf who first greets you on the boat in Morrowind. In Skyrim‘s Dawnguard DLC, we learn that he died at Kvatch during the Oblivion Crisis, and his soul was captured by a Dremora.

Not everyone suffered horribly. There’s Volanaro, who we first meet as a simple guard in Morrowind. A few years later, he shows up as a prominent member of the Mages Guild in Bruma during Oblivion.

Perhaps the most interesting finding is that Sheogorath, the Prince of Madness encountered in Skyrim, is actually the player character from the Shivering Isles, marking the only time a player character has ever returned.

Aside from reading the in-game books, I never noticed how the worlds tied together. This list really makes me want to load up Morrowind and play those expansions I never got into.